Pudge Finds a Job (or Houston, You Have a Catcher)

Share All sharing options for: Pudge Finds a Job (or Houston, You Have a Catcher) 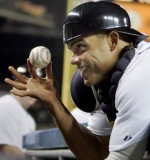 The wait is finally over for Pudge Rodriguez. In the midst of an impressive performance in the World Baseball Classic (9-for-15, two homers, and six RBIs) and teams beginning to shape their final rosters with three weeks left in Spring Training, the catcher in search of a job has found one.

Though teams like the Giants and Twins have expressed recent interest, the true market for Pudge seemed to exist among three suitors: the Mets, Marlins, and Astros. And with the Mets having to make a move to clear a spot for Pudge, it was ultimately a two-team race. Today, the Astros apparently wanted to win this sweepstakes.

Pudge reached agreement on a one-year, $1.5 million contract with the Astros this afternoon. The deal includes an additional $1.5 million available in incentive clauses. According to the Houston Chronicle, Pudge is expected to step in as the Astros' starting catcher, so maybe he'll get the playing time he's been seeking.

You know, maybe I'm a bit wistful after watching Pudge play in the WBC, and seeing the Tigers on TV for the first time today, but I think I'm going to miss the guy a little bit. I didn't miss Pudge when he was traded last season, and I certainly think the Tigers upgraded with Gerald Laird and Matt Treanor. I guess it still feels a bit weird to me after he was a part of the Tigers for so long.

● Earlier today, Astros beat writer Jose de Jesus Ortiz thought this was a move the team had to make.

● Through illustration, Samara imagines how a reunion between former Tigers teammates will go before tonight's WBC game between Puerto Rico and Venezuela.

● Crawfish Boxes looks at the contributions Pudge should make to the Astros, based on various projection systems.