We have terribly sad news in Tiger Town today, as Hall of Famer George Kell passed away at the age of 86. According to reports, he died in his sleep early this morning at his home in Swifton, Arkansas. 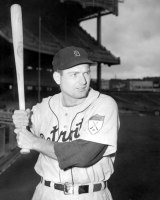 Kell was a 10-time All-Star, six of those honors coming during his years with the Detroit Tigers (1946-1952). He also played with the Philadelphia Athletics, Boston Red Sox, Chicago White Sox, and Baltimore Orioles in a 15-year major league career.

Perhaps his most sterling achievement as a ballplayer was beating out Ted Williams for the American League batting title in 1949, edging him out by mere percentage points. Kell was elected to the Baseball Hall of Fame in 1983 by the veterans committee.

Kell was a third baseman almost exclusively throughout his career. And he pretty much remains the gold standard for that position in Tigers history. Just the other day, The Daily Fungo posted an item about the team's all-time third basemen, and the list is basically Kell and everyone else. (No offense to Aurelio Rodriguez.) The Spot Starters had him ranked #24 on its list of Top 100 Tigers.

I imagine most everyone reading this, however, remembers Kell more as a broadcaster for the Tigers from 1959 to 1996. And from 1975 to 1996, he was the team's television play-by-play man with Al Kaline. With all due respect to Ernie Harwell, for those who grew up watching the Tigers on TV, Kell was the voice of baseball, the voice of summer.

As a kid developing into a baseball fan, I remember being fascinated when my father told me that Kell once played for the Tigers. The whole idea seemed so amazing to me. I think it was my first realization that there was a history to the game, so much bigger and richer than what I was watching on TV.

And if you'll indulge my sharing one more memory - this one much more recent - the first thing I thought of when I heard the news of Kell's death was a phone call I got from Mike McClary. He'd just gotten in touch with Kell to do an interview on The Detroit Tigers Podcast, and it was like talking to a kid on Christmas. I could almost imagine Lil' Mikey's feet dangling off the couch while sharing the big news. You can find that interview here. Mike just re-posted it.

Thanks to everyone who sent me a note about Kell's passing. I appreciate you letting me know, as a project had me away from the computer for most of the morning.