Share All sharing options for: Welcome Back, James Skelton? 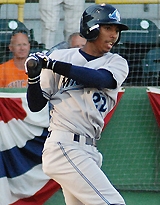 Remember when we in the Tigersosphere were jumping up and down and throwing things through windows when James Skelton was left off of Detroit's 40-man roster and subsequently selected by the Arizona Diamondbacks in baseball's Rule 5 Draft? That outrage may have been for naught.

Despite doing all they can to make him stick - playing him at catcher, second base, and the outfield - the D-Backs have decided that Skelton will not be on their 25-man roster, and thus must place him on waivers. Unless another team claims him, Skelton must then be offered back to the Tigers for $25,000, half of what Arizona paid to draft him initially. (I thought Rule 5 guys automatically went back to their former teams if waived, but have obviously been set straight on that notion. And this is really as much thought as I care to put into it.)

Another possibility, if the D-Backs really want to keep Skelton badly enough, would be for Arizona and Detroit to work out a trade and give the Tigers something back in return. D-Backs GM Josh Byrnes confirmed to MLB.com's Steve Gilbert that he's had conversations with Dave Dombrowski over that very subject.

But as much as Skelton may have impressed the D-Backs with his defensive skills, he couldn't do much with the bat this spring. In 45 plate appearances, Skelton batted just .150/.244/.175 with one home run and seven RBIs.

Thanks to Zappatista (who's on Twitter now - yay!) for e-mailing this story over this morning. It's nice to know I'm not the only one up and surfing around that early.