Before it has even been offered to West Michigan Whitecaps fans this season, the Fifth Third Burger is becoming an object of mythical proportions. With four half-pound patties, cheddar cheese sauce, american cheese slices, jalapenos, chili, tomatoes, sour cream, lettuce, and salsa somehow kept between another half-pound of bun, it could be more burger than any man should rightly take on, yet the challenge presents itself. It taunts us. Its girth reminds us that perhaps not all things are possible in this life.

Or are they? Some refuse to accept being humbled by a giant hamburger covered in taco stuff. And because they attempt to take on what most of us might fear, these men are brave. CNBC's Darren Rovell sampled the Fifth Third Burger last week, but really only approached it as curiosity. But here at BYB, we wanted to talk to someone who truly confronted the beast, who put on sweatpants, perched on the edge of his couch like a coiled spring, ready to attack.

That man is XM Radio's Casey Stern, and he generously stepped down from Mount Manhood to answer five of our questions about his culinary rite of passage. 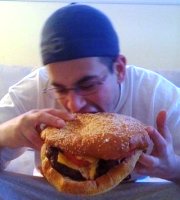 Bless You Boys: Did you seek out the challenge of the Fifth Third Burger or did the West Michigan Whitecaps come to you?

Casey Stern: I really didn't even know about the burger at first. Once my producer told me about it, I was really intrigued. So we had the guys over at the Whitecaps on the show and jokingly, I told them they should send me one and they did. Literally everything that goes with it.

BYB: How much of the burger did you end up eating? And in the aftermath, how do you feel?

CS: I ended up eating about half and afterwards, I honestly felt like I wanted to die. Food coma is one thing. This was another!

BYB: How much of that thing did you realistically think you could take down beforehand? And did your prediction change after you saw the actual beast in front of you?

CS: When I first started putting it together, my thoughts of being able to put this down were gone. I mean, it is truly hard to believe how much food was on the plate in front of me. I have had a stomach ache since. That was over 24 hours ago. It is that ridiculous.

BYB: For all the hype the burger has gotten for its size and caloric content, no one's talked about whether or not it's any good. What did you think of it and would you ever attempt to eat it again?

It was really good but the funny part is that even with all the toppings, the best part was the burger. I am not a huge fan of chili on my burger, so it was a little distracting. If I ordered this at the park, I would ask for it without it.

BYB: We can't have a conversation with the host of XM Radio's MLB Live Weekend and not ask a real baseball question. How do you see this season going for the Detroit Tigers, and how will the AL Central shake out?

CS: I think the Tigers are going to have a better season than 2008, thankfully for their fan base, but I don't think they are going to the playoffs.

Jeremy Bonderman is turning into a big time bust, and the rest of that staff behind Verlander, I am really skeptical about, no matter how much Porcello continues to surprise. Tack on the closer situation and Leyland getting crazier, I am not high on them. I think it comes down to the Twins and whether or not the Tribe can pitch enough every five days from the starting standpoint to contend with them.

Thanks to Casey for being a good sport and taking the time to answer Five Questions. We're friends on Facebook (I enjoyed his work on MLB Radio and miss listening to him on my iPod) and when I noticed that he'd tried the Fifth Third Burger, I knew I had to interview him about it. If you're an XM subscriber, give him a listen this weekend on MLB Live Weekend.

And if you're one of those who dare to take on this monstrosity, e-mail us and share your story.