When McLain Grooved a Pitch to Mantle

Share All sharing options for: When McLain Grooved a Pitch to Mantle 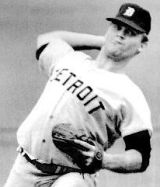 With the uproar (perhaps a slight exaggeration, since the media seems more outraged over this than fans, as far as I can tell) over the allegations of Alex Rodriguez tipping pitches to opposing players so they'd tip pitches to him, Friday's New York Times looked back to the 1968 season, when Mickey Mantle and Denny McLain were involved in just such an incident.

Alan Schwarz talked to Tigers broadcaster Jim Price, who was the catcher when McLain grooved a pitch to Mantle to help him move ahead of Jimmie Foxx on the career home runs list before he retired. (The Tigers had nothing to lose, as they were ahead 6-1 in the game, had already clinched the AL pennant, and McLain had already won 30 games by that point in late September.)

“When I got there, Denny said, ‘Hey, big guy, should I let him hit one?’ ” Price recalled Thursday night in a telephone interview. “I said it was a great idea. Mickey was always nice to me. So I went back behind the plate and Mickey, like he always did, was tapping the plate with his bat when I said, ‘Want us to groove one for you?’ ”

Once Mantle realized that Price and McLain weren't kidding, he said exactly what sort of pitch he wanted. (“High and tight, mediocre cheese.") McLain took a few tries to get Mantle the pitch he was asking for (or threw some pitches elsewhere, for the sake of appearances), but eventually teed it up as requested and Mantle hit it into the right field upper deck.

Schwarz's article is definitely worth a read, as he details how McLain got the story wrong in his own autobiography and talks to Price further about the possibility that A-Rod made a regular practice of pitch tipping. There's also a great photo of Mantle rounding third base at a rather empty Tiger Stadium. (Only 9,063 were in attendance that day.)

Thanks to Graham Filler of The Rivalry, Esq. (SB Nation's Big 10 College Football blog) for passing along the NYT article. (RudeMood19 also posted a link to it in last night's GameThread.)