The Rangers tried hard to avoid that 10th straight loss in Detroit, but they ultimately couldn't overcome the four runs scored by the Tigers in a decisive sixth inning. That's when the home team brought out the boomsticks.

Wilkin Ramirez introduced himself to Detroit in the best way possible, blasting his first major league hit for a home run deep, deep, deep to center field. Into the shrubs! "Big boy territory," as Rod Allen calls it. We can mark off that territory approximately 433 feet from home plate, because that was the measurement on Ramirez's home run.

Two batters later, Brandon Inge followed up with a two-run homer, and that was more than enough for Justin Verlander to get his fourth win in his last five starts. (Of course, it should be five straight wins.)

He didn't reach double-digit strikeouts again (and tie any sort of record that isn't really a record, but still impressive nonetheless), but did strike out eight Texas batters. And though a high pitch count once again took him out of the game an inning or so earlier than Jim Leyland probably would've preferred (especially when Brandon Lyon and Joel Zumaya each gave up a run), he kept the Rangers' bats quiet for the second straight night.

See, if I were Ramirez, I'd just retire right now. Do it like George Costanza, and walk off on a high note. Can it get much better than one hit, one home run? Of course, Ramirez is probably smarter than me and will stick with this baseball thing. Become the Tigers' next great outfielder, and get a chance at the glory and the big money.

The other guy who smacked a long ball tonight? Ryan Raburn, who's now homered in his last three games. He's probably going to be in the lineup the next time the Tigers face a left-handed pitcher. Unfortunately for him, that won't be for at least the next four games.

There was quite an argument in the GameThread about Lyon, and whether or not he's pitching that well for the Tigers. I think I agree that he's been better than his numbers might indicate (and also think it's kind of mean for the home fans to boo him). But when you come in and immediately do this... 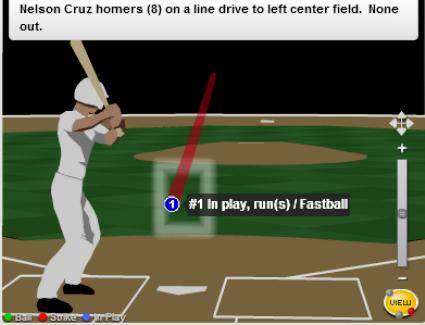 ... it does not help your cause, Brandon Lyon.

by okie for michigan

I've always said the GameThreads are part sports bar, part support group. We do whatever we can to help.