Share All sharing options for: This Streak Goes to 11: Tigers 4, Rangers 3

The good news for the Texas Rangers? They don't have to play at Comerica Park again this season. The bad news for the Detroit Tigers? They don't get to play the Rangers at home anymore this year. Texas came in looking like they'd be a different team than the one which visited in April, having won seven straight games. But much like the Tigers last week in Minneapolis, the Rangers just found three different ways to lose.

The streak looked like it might end when a gassed-out Edwin Jackson gave up a game-tying two-run double to Nelson Cruz in the eighth inning. Jim Leyland must have figured Jackson deserved to win or lose on his own at that point, however, and kept him in the ballgame despite being over 120 pitches. With runners on first and third, Jackson had just enough left to strike out Jarrod Saltalamacchia to end the threat and give the Tigers a chance to win the ballgame.

In Detroit's half of the inning, Miguel Cabrera made sure Jackson's exhaustive effort wasn't wasted, knocking a single into center to drive in Placido Polanco for what turned out to be the game-winning run. And that run was generated with two outs in the inning. Polanco singled, Clete Thomas walked, and Cabrera singled.

Fernando Rodney pitched an uncomfortably interesting ninth, putting two of the first three batters he faced on base. But he got Michael Young to hit into a 4-6-3 double play for his eighth save of the year, and the Tigers' sixth straight win.

Having two aces in your starting rotation is a hell of a thing. And Jackson gives the Tigers that luxury (necessity?) right now, by allowing very few runs and pitching deep into ballgames. This afternoon, he went eight innings, giving the Tigers three consecutive starts in which he pitched at least seven. Clearly, Leyland wanted to make sure that kind of work wasn't tagged with a no-decision. Either that, or he had some reason - perhaps the next two days' starting pitchers, as Kurt speculated - not to employ any middle relievers today.

Jackson also notched seven strikeouts, his fourth straight game with six or more. However, Jackson did struggle with his control today, allowing a season-high five walks. Go figure: his two highest walk totals this year are both against the Rangers.

Oh, The Cult of Clete would be displeased if I neglected to mention #34's home run. Especially because it was a majestic blast that once again tickled the innocent shrubbery residing in center field. Apparently, Clete Thomas saw the homer Wilkin Ramirez hit last night and thought to himself, "I want to go to there." And since I've become fond of posting screen shots of first-pitch home runs... 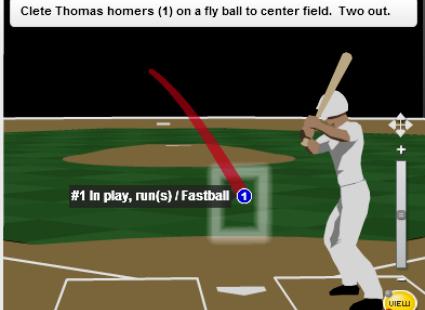 132 pitches, Jim Leyland? What are you trying to do to Edwin Jackson? Was pitching him after a one-hour-plus rain delay last weekend not enough? Did his mother threaten you with bodily harm if you didn't pitch him to the point of exhaustion?

Obviously, Leyland felt that Jackson was better in the seventh or eighth innings than any of his middle relievers. (FOX Sports Detroit had him clocked at 101 on a pitch to Chris Davis in the eighth, though MLB Gameday had it at 97 m.p.h., which is still damn impressive.) Or, as mentioned above, he felt the need to save those guys for the weekend, when they'll likely be needed. Or maybe Jackson is just one of those rare studs who can handle this kind of workload, and Leyland knows it. Still... does he need to keep pushing the issue?

As tempting as it might be to post one of the blistering comments from Lone Star Ball's GameThreads, we'll keep this an in-house feature:

Does everyone in the bullpen have the swine flu?