This Week's Poll: Who's Your Tigers All-Star?

Share All sharing options for: This Week's Poll: Who's Your Tigers All-Star? 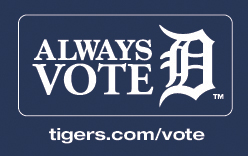 Have you filled out your All-Star ballot yet? We filled out a bunch last time we were at the ballpark (and at least one of them was a straight Tigers ticket), but of course, you can cast your All-Star votes plenty of times online through MLB.com.

The Tigers are holding All-Star Vote parties around the metro Detroit area, as well. You can get more information here, but as of right now, parties are being held May 26 in Plymouth, June 16 in Toledo, and June 18 at Hockeytown Cafe.

Hopefully, between the fan vote and the team's performance so far this season, more than one Tiger will be on the American League All-Star team. And there are certainly several deserving candidates. But every team gets at least one representative, so if it had to be just one guy, who should it be? That brings us to this week's poll question:

If you can only choose one, which Tiger should be an All-Star?

Thanks to ThaWalrus9 for suggesting this week's poll. The timing is just right too, as the Tigers sent over that "Always Vote D" badge, and I've been meaning to post it on the site. If you think any other Tigers should be given consideration (although I think that list pretty much covers it), post your thoughts in the comments.

You can find the poll on the right sidebar below the FanPosts block. Or you can vote here. And if you have suggestions for future poll questions, shoot me an e-mail.

How did our last poll go?

I believe this is what we call a landslide. Maybe not the best poll question we've had, but I got caught in the excitement of some players stealing home and thought it might be worth a shot.

Will a Tiger steal home plate this year?