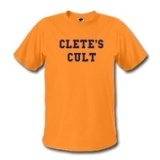 The Cult of Clete can rejoice! Not only did the Tigers announce earlier today that outfielder Clete Thomas was called up from Triple-A Toledo -- having made his way back to the majors after Tommy John surgery -- but the Bless You Boys fan favorite batted third and very nearly hit for the cycle. The Tigers and Jim Leyland both shook things up. Detroit made a couple roster moves, calling up Thomas and infielder Jeff Larish from Toledo, while sending lefty reliever Clay Rapada back to Toledo and placing Carlos Guillen on the disabled list with a sore shoulder. Thomas was said to be surprised when he looked at the lineup card and saw his name next to the third slot, but Leyland said he was trying to mix things up a bit in an attempt to spark what has become a low-scoring team recently.

It obviously worked, not the least because of Thomas. In his first three at-bats, he hit a double, a triple and a single to set up the attempt at the cycle. He grounded out and walked in his final two at-bats of the game to fall short, but helped the Tigers jump out to a 6-0 lead after two innings and 9-0 lead after four.

Almost lost is the stellar showing by Tigers rookie Rick Porcello. He pitched what you expect to be a typical Porcello outing when he settles into his career. The sinkerballer forced 14 ground balls -- resulting in three double plays -- and struck out three for his first win in front of the Comerica Park fans. He bounced back beautifully from a pair of downright ugly games.He dropped his ERA to 4.71 from 6.23.

With the win, the Tigers avoided the two-game sweep, and leave for an eight-game road trip that begins in Chicago, then continues in Cleveland and Minnesota.

There are so many details in today's game, as you'd expect. Two more to note: Miguel Cabrera hit a 440-foot "moon shot" to left field for two runs. He came a triple away from the cycle. Unlike Thomas, he never came to bat in the eighth inning, because Leyland chose to pinch hit Larish. ... Curtis Granderson, debuting in the fifth batting slot, hit a home run as well, his ninth. Grandy is now tied for second in the AL in home runs, two behind former Tiger Carlos Pena with 11. ... This is the Tigers' third shutout of the season and second by a 9-0 score.

I can't find any whimper for the Tigers, so I'll whimper for the Twins tonight. They played defense uncharacteristic of a team with such good fundamental. They were charged with three errors and made multiple miscues on balls that fell in for hits as well. It was refreshing to see a team do what the Tigers have typically done this year: looked ugly in the field and gave up the crooked inning to get knocked out of the game. Two errors in the second helped Detroit score five in the frame.

The culties were all happy with Clete's play today. wepri31 said it first:

Ian will be back Wednesday! Now..

Kurt of Mack Avenue Tigers served as your guest blogger while Ian was in Seattle.