No All-Star MVP For Curtis Granderson?

Share All sharing options for: No All-Star MVP For Curtis Granderson?

Have you seen this man? He was last seen wearing a Detroit Tigers jersey, being robbed of an All-Star MVP award. 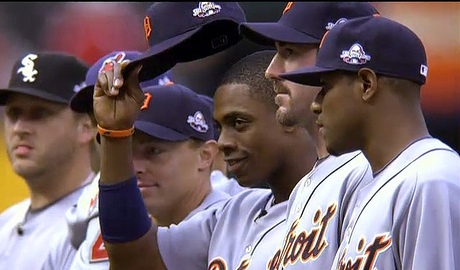 Okay, maybe that's a bit much. And Carl Crawford certainly made a fine catch to rob Brad Hawpe of a home run that would've given the National League a 4-3 lead. But how about the guy that set up the American League's game-winning run by hitting an eighth-inning triple, and scoring on Adam Jones's sacrifice fly? Shouldn't Curtis Granderson have been the All-Star Game's Most Valuable Player?

Oh, well. It was fun to see a Detroit Tiger make the impact play of the game. (And remember when Grandy used to hit more of those triples?)

Besides Granderson's 1-for-1 performance (and four innings in center field), Edwin Jackson pitched a perfect fifth inning, and Brandon Inge played two innings in the field, going 0-for-1 in the ninth for his lone at-bat. Justin Verlander didn't appear in the game, as it was decided beforehand that he wouldn't pitch unless absolutely needed.

With the win (the American League's seventh straight, and 13th consecutive All-Star Game without a loss), the AL gets home-field advantage in the World Series. Which AL team will get to enjoy that?

(Thanks to allikazoo for posting this screen shot in our All-Star Game open thread, and suggesting the COTN.)