Stop Us If You've Read This One Before: Mariners 2, Tigers 1

Share All sharing options for: Stop Us If You've Read This One Before: Mariners 2, Tigers 1 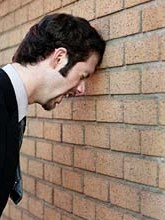 "So what was the score of the Tigers game?" he asked.

"No, I know. But what about today? What was the score today?"

It wasn't ever really amusing, but this officially isn't funny anymore. In four of their last five games, the Detroit Tigers have lost by a score of 2-1. (It's become so redundant that Tigers bloggers are using the same headlines.)

And this time, you couldn't even say they squandered scoring opportunities as they had in those other three games. This afternoon at Comerica Park, it was a rotating display of weak pop-ups and shallow fly-outs, batter after batter after batter.

The only thing that was hit hard was the dirt directly in front of home plate, as Tigers hitters smashed their bats down in frustration after continually failing to produce a solid hit. (Okay, Curtis Granderson hit that eighth-inning triple pretty hard. And hey, it drove in a run.) Jarrod Washburn allowed only two hits in his seven innings of work, and Detroit only managed three for the entire game.

Not that the Mariners didn't have a good pitching staff coming into this series. They led the American League in ERA. But for the most part, the Tigers have been able to score some runs - or at least just enough - while playing at home. If they can't even count on that, then they really might indeed be in trouble as the White Sox - now tied for first place in the AL Central - visit for four games this weekend.

Maybe Edwin Jackson and Luke French can share some adult beverages at Grandy's wine tasting and bachelor auction tonight, commiserating over being jilted by the Tigers' offense. In four starts, French has allowed six runs in 21.1 innings. Yet he only has one win to show for it. French gave up eight hits in his 5.1 innings today, but also struck out a career-high six batters and walked none.

As we've said before, a major league pitcher should be able to surrender two runs and still expect to win a ballgame. Of course, he needs a major league offense to score for him, and right now, the Tigers aren't looking like one.

Given how this team has played lately, maybe this comment wasn't all that prescient. But it was posted about 15 minutes before the game began, and turned out to be frustratingly true.

I will tell you what will happen.