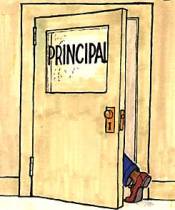 I should preface this by saying that if you normally read the front page posts, but don't generally traffic in the comments or GameThreads, this probably isn't going to concern or interest you much. Pardon the diversion, and we'll get you back to your regularly scheduled Detroit Tigers blogging soon enough.

Having said that, there's been a bit of speculation over what this post would include, after I hinted at it in yesterday's post-game thread. I hope it's not a disappointment that the guessing was spot-on. This is indeed about the little dust-up we had yesterday morning (and going back to Saturday night, when I thought it had been taken care of).

In light of that, I feel that I had no choice but to ban one of the people involved in the juvenile slapfest, and came close to banning both of them. (I'm still not convinced that I shouldn't have, either.) I'm grateful for anyone who takes the time to post a comment here, but clearly, this situation had gotten out of hand.

Now, for those of you who looked at the comments and insults and thought the whole fracas was much ado about nothing and relatively harmless, I understand what you're saying. But I'm not looking at this as an isolated incident. There have been multiple warnings about conduct toward other members and posting of offensive material or language, and I think it's been tolerated for far too long already.

Yes, I realize that what I'm objecting to might seem tame to what goes on in other blogs and communities. But I don't intend to let BYB get to that point. People shouldn't have to come here and worry about whether or not they're going to be insulted or offended any time there's an argument or disagreement. It's a sports site. There will be plenty of disagreement. But it doesn't have to lead to personal insults or attacks.

Thankfully, this sort of thing happens rarely here, as everyone in this community is generally respectful of each other. We're all here to have fun. And nothing really bad has happened. So let's keep it that way, okay?

BYB doesn't have a no-profanity policy in the comments, because I think it's a good thing to let people express their emotions as they would in normal company. We get excited. Tempers flare. Etc.

However, I'm beginning to re-evaluate that stance, because this is also getting out of hand. If you simply like to log on, voice your displeasure with a swear word or two, and contribute nothing else to the discussion, you either need to find a more creative way to express yourself or find someplace else to post that stuff. Because it's getting old and bringing down the GameThreads.

If anyone has any questions or concerns, feels I'm being unfair and unreasonable, or thinks I'm making too big a deal about this stuff, e-mail me at ian.byb@gmail.com. Thank you, and carry on with the rest of your day.