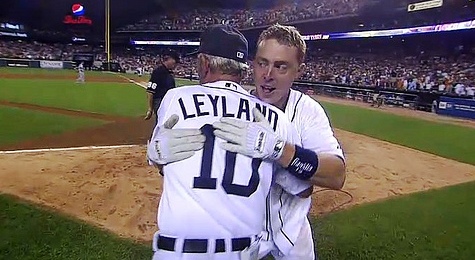 The Detroit Tigers have apparently found their formula for winning. Don't allow the other team to score any runs, and then wait for the third baseman to do something awesome.

Yesterday in Boston, Justin Verlander took care of the shutout part (with help from Fernando Rodney), while Ryan Raburn handled the heroics on offense, driving home the two Tigers runs. Tonight in Detroit, Tigers fans got to see the Jarrod Washburn the team hoped they were getting when they traded for him two weeks ago. Facing Zack Greinke, the Tigers likely weren't going to score too many runs, so they needed good pitching on their side. Washburn gave it to them, shutting out the Royals for eight innings. He also didn't allow a hit until one out remained in the fifth.

But after Brandon Lyon finished off the shutout with a perfect ninth, the Tigers still had to put a run on the board themselves. That's where Detroit's usual third baseman took his turn with the Big Boi bat. Former Tiger Roman Colon missed with three off-speed pitches, and then threw the fastball Inge must have been sitting on. The pitch was high in the zone (and actually a ball), but Inge jumped on it, uppercutting high into the Detroit sky. The only question was where it was going to land.

How about off the bullpen dugout for a walk-off home run?

Ballgame. Two straight shutouts for the pitching staff. Continued heroics from the third baseman. And maybe a little bit of redemption for the Tigers' shiny new addition. Not a bad Friday night at all.

And your runner-up, though you probably have to scroll up 30 comments or so for context. Although Rod Allen's "They love me" as the crowd below the FSD broadcast booth was calling for a foul ball he got was pretty funny. So was Jim Leyland's "We can still go out for dinner" in his post-game presser.

(Thanks to allikazoo for the screen shot)