Tom Gage already covered this in Friday's Detroit News, and I'm glad he did, because one of the city's veteran baseball writers should be taking the Detroit Tigers and their ownership to task for failing to do the right thing.

But I intended to write a similar article for today, and I'm still going to. Because frankly, it's a sentiment that needs to be expressed more than once.

The Detroit Tigers should give Sparky Anderson the honor he deserves. 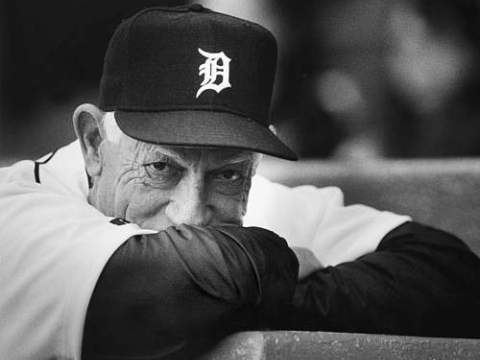 Retire his uniform. Put his name on the outfield wall at Comerica Park. He's an integral part of Tigers history. Every fan who walks into Comerica Park should see Sparky's name and reminisce about his time in Detroit and the teams he managed here. Or, if someone isn't familiar with him, that person can turn to their companion at the ballgame, ask about Sparky, and learn.

Hold a ceremony for him, in which players and peers get to express their admiration for the man. But most importantly, let Tigers fans show how much he meant to them while he was the manager of their baseball team.

Sparky managed the Tigers for 17 years, from 1979 to 1995. He won 1,331 games (most in franchise history) and a World Series title. For some people reading this, he was beyond your time. But for others, including myself, he was the only Tigers manager we knew when growing up.

And he didn't just manage the Tigers. Sparky was a part of the metro Detroit community. He was an instantly recognizable face and personality. He palled around with reporters and sportscasters. (Remember him calling Bernie Smilovitz "Bernando" whenever he appeared on Channel 4?) He endorsed local businesses on television. Perhaps his greatest legacy was creating CATCH, a charity for children that exists to this day.

For all intents and purposes, Sparky's number has already been retired by the Tigers. No one has worn the number 11 in a Tigers uniform since he left Detroit. But why not make it official? Never mind that it should've been done years ago. Sparky's good enough for the Baseball Hall of Fame, but not for Comerica Park's outfield wall?

(And if any hard feelings still exist between Sparky and Mike Ilitch over refusing to manage replacement players in 1994, is that grudge really so important now? Besides, Mr. I: This isn't about you.)

The 1984 World Series Championship team will be honored before tonight's game. And Sparky will be there as part of the fesitivities. But as Gage pointed out in his column, this might be the last time Sparky comes back to Comerica Park.

So while the Tigers have him here, why not give him a proper tribute for what he gave to the team and the community? And why not do it while the baseball world is going to be watching what happens in Detroit tonight, because of the Tigers' series with the Twins?

If I had to guess, I'd say Sparky would prefer not to be honored individually tonight. He'd want the spotlight to be on his players, the guys who worked so hard to win that championship. But I would also guess that those same players would be more than happy to cede the stage to Sparky, and make sure he gets his moment.

Maybe this is secretly in the plans, and the Tigers are keeping it hush-hush because they know how Sparky would react. I certainly hope so. And if that's the case, I would be more than happy to put this post in a drawer somewhere.