Share All sharing options for: Jayson Werth should be Tigers' top target

We've looked at Dan Uggla, Carl Crawford and Adam Dunn as possible targets for the Tigers. They are surely three good batters, but three good batters that all made me feel they weren't a perfect fit for what the Tigers need. Uggla lacks for defense and has an excessive view of what he should be paid; Dunn is aging and can't field and yet feels DH-ing is beneath him; Crawford is the No. 1 position player on the market and will be paid a Brinks Trunk for too many years. Of the group, he is the one I find most likely to be overpaid. That's a bet I don't think the Tigers should take.

Is there any player I do back the smaller Brinks Truck up for? Jayson Werth would probably be my pick. Above average defense, gap-power, above-average home run power, a good eye. Above all that, he's also been pretty consistent for several seasons in a row.

Here's a graph comparing the wOBA -- a nice thumbnail sketch of everything a batter does -- of Magglio Ordonez and Jayson Werth by age. The 31-year-old season was Ordonez's first in Detroit and Werth's most recent in Philadelphia. Werth is green. 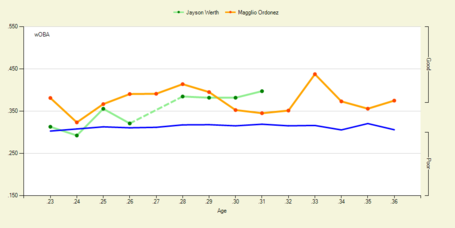 As you can see with Werth, he's put up four consistently above-average seasons at the plate and he was playing better baseball than Ordonez at the same age.

Now there's obviously some problems with Werth, so let's get them out of the way:

Werth plays in a slightly batter-friendly ballpark with a three-year park factor of 101 for batters. In other words, a slight batter's park. Comerica Park's factor is ... 101. OK, well let's never mind on that one. Those were from Baseball-Reference. ESPN.com has the two parks back-to-back in the standings. However, without a doubt Citizen's Bank Park allows more home runs than Comerica Park, with a 1.125 vs. 0.922 HR factor.

The move from the National League to the American League does have a slight affect on a batter, the same as it would have on Dunn.

Finally, it is fair to say Werth's home runs were not the same quality as Dunn's. Dunn just launches the ball in the 400s and led the NL in no doubters, according to the Hit Tracker site. Nearly half of Werth's qualified as "Just Enough." Dunn is a frequent leader for no doubters. Werth led for "just enough" in 2009. That makes you fear a dropoff in home runs for Werth.

So here's another graph. It's Werth vs. Dunn for wOBA. Werth is again green.

Werth vs. Dunn by wOBA and year 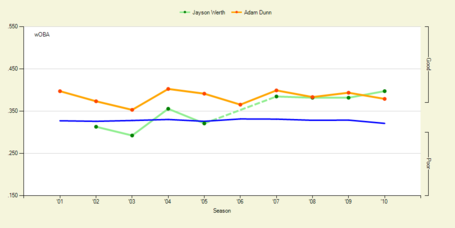 They're different kinds of batters, yet their seasons seem to twist like a helix. The big difference between the players? Werth can stand in right field for the entire time in Detroit. He'll demand a bit more per year to do it, but that's fine. It leaves the designated hitter position open. Dunn would demand four or five years anyway and clog the DH the entire time. The Tigers would still need to get a right fielder.

Knocking half a win off for aging / moving to Comerica / moving to the American League would still give Werth 4.5 WAR. So he should be valued at a peak of 18-20 million, or possibly more if the Tigers manage to work their way up to the upper-80s in wins. (That's a lot of work, they're still trying to work their way back to where they were in 2010 after losing Johnny Damon and Magglio Ordonez to free agency.)

He'll fall short of the seven years, $120 million Matt Holliday got. As well he should. Holliday was two years younger and has had a better season than Werth at the same age so far. He was coming off a 6.9 WAR year even. Plus I have to admit shock Holliday got that in the first place. So that's way past the ceiling of Werth. I'd put Werth's best outcome around six years, $96 million. That's a risk for the team that signs him, especially the fifth and sixth years. I wouldn't like those. But that might be the price to play.

That's still a lot of money. But if there's only one Type-A style player to sign, that's the one Detroit should get. They'll still need to find a DH, but you shouldn't overpay for a player who can only hit and limits your options. Thus no thanks on Dunn for me. There's plenty of DH-style batters Detroit can bid on. Other than Werth, the only corner outfielders are Carl Crawford, Johnny Damon, Manny Ramirez and Magglio Ordonez, and only two of those guys spend much time in right field (where you most certainly don't want Ryan Raburn). They still need to find another pitcher, because the rotation will be no better next year than it was in 2010. But a player like Werth I feel is a good start.

Interestingly, he's one of the few players they haven't been linked to in the media, despite their need for a player that meets his exact descriptions ... .