Share All sharing options for: Tigers would have been better served by picking up Jhonny Peralta's option

Jhonny Peralta's best season in professional baseball was in 2005. His second best was in 2008. He managed to hit for a fair average in both years, as well as some power. However, in the past two seasons, he has gotten worse and worse at the plate, and in the field he was driven from the keystone position of shortstop to third base until Detroit returned him to the middle of the infield.

Sunday the Detroit Tigers agreed to a two-year deal with him worth at least $11.75 million with an option for a third year that would increase the total value of the contract to $17.25 million.

They now have a below average defender at shortstop and first base, as well as a third baseman who has been sliding closer toward average each season. And they have this infield for the next two seasons and possibly three.

Excuse me if I take a moment here to mourn for the future of contact pitcher Rick Porcello, whose ability to get ground balls requires the team to put a solid infield defense around him. This infield defense is certainly doing him no favors going forward.

But at least Peralta can contribute some offense right? He had 14 home runs in 2010, and has had as many as 23 in the past. I just hope the Tigers are not making the mistake of overvaluing the RBI statistic, because it's hard to find a reason they would give Peralta such a pay raise for any other reason. Clearly, they overvalue offense, learning nothing from the fact 2006 and 2009 were the team's best two seasons since the 1980s and both years were predicated on a defense-first mentality.

Worrisome are Peralta's splits at Comerica Park during his career:

Not good. In the past two years, they have been even worse. For example, this was the picture in the 2010 season:

Obviously too much can be made of splits. They are a smaller sample size. But the picture in Detroit so far has been bleak and consistently bad over so many seasons it does not give a lot of confidence.

Another reason to worry about this deal: The closest comparisons to Peralta, however, will not thrill Tigers fans. He is remarkably similar to Neifi Perez and Edgar Renteria at similar ages: 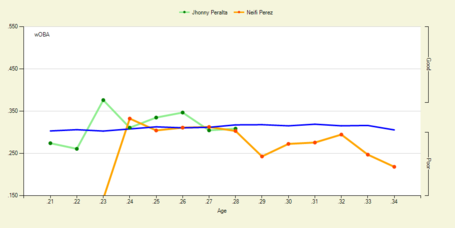 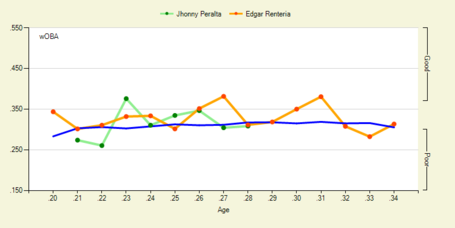 The wOBA stat is a quick way of encompassing all the things a batter does into one quick glance. It's scaled to look similar to the OBA we are already familiar with. In other words, .330 is about average. .350 and above is good. Peralta's woBA the past two years has been .304 and .309.

As you can see, neither Renteria nor Perez were good players at the age of 28. The Tigers have to hope Peralta follows Renteria's lead and improves. However, Renteria went from the American League to the National League and showed his improvement there. And hey, at least Perez could play some defense.

The Tigers didn't have a lot of good choices in finding a shortstop for the 2011 season. The free agent market was not ripe, and the internal candidates were not great. However, Detroit would have been best served by picking up the 2011 option for $7.25 million rather than locking in a player like this for multiple years. This move is not one to be celebrated. It is one to be tolerated, and only when we get to the end of the offseason and are able to look at the moves as a complete group.