Nine questions (or so) with author Lee Panas

Share All sharing options for: Nine questions (or so) with author Lee Panas 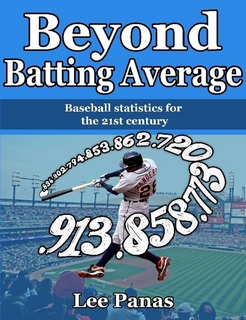 Lee Panas is one of the most established Tigers bloggers, having started Tiger Tales in 2005. He graciously welcomed me to the Tigers blogosphere with open arms in 2006 and helped answer my questions along the way.

He's long looked at the sport from a sabermetric bend, helping to explain new stats as well as creating one or two of his own.

Now he's taken that to another level with the publishing of the book Beyond Batting Average (full disclosure, I helped in editing this book). The book is available both in a hard copy and digital version at Lulu.com.

With his book, Lee gives the reader a step-by-step guide through how stats were developed and how to best apply them.

He even got Samara Pearlstein from Roar of the Tigers involved by having her illustrate the book and design the cover.

Hey, we're a pretty talented bunch in this blogosphere!

I asked Lee a few questions this weekend about the process of writing a book -- it took him more than a year and a half from start to finish! -- as well as his views on sabermetrics today.

There are a lot of baseball books that come out every year, what do you think your book uniquely brings to the table?

There are usually a couple of very creative sabermetrics books that come out each year. One of the things which I think sets my book apart is that I assume no prior reader knowledge of sabermetrics. There is so much more talk about sabermetrics now than there was a few years ago and I have noticed that more people want to learn about it. However, I feel as if the field is moving too fast and that a lot of people have been overwhelmed by the amount of new information. The purpose of this book is to put all the new metrics in one place and to organize the information into a coherent story.

More after the jump!

You've brought another Tigers blogger into the fold, Samara Pearlstein of Roar of the Tigers, to do illustrations. What made you choose to bring her on board and what do you think of the job she did?

I have tried to keep the book as simple as possible and to explain all the methods step by step but no matter how much you break it down, sabermetrics is still a difficult subject for some people. I wanted to find a way to make the subject less intimidating, so I came up with the idea of including some illustrations to lighten things up. Samara is an excellent artist and knowledgeable baseball fan so she was a perfect fit. She did a fantastic job. Her work is definitely an important part of the book.

Writing a book seems like a process you don't want to enter without a lot of forethought. How long have you been considering writing yours? How long did the process take once you got started?

I have been blogging about the Tigers since 2005 and was a very active participant in various forums prior to that. I find that a lot of my time is spent explaining sabermetrics to people. Blogging is a pretty good vehicle for that but I can only give bits and pieces here and there in that format. So, I decided to write a book where I could consolidate all the information. Since I am pretty busy with my full-time job, it took some time to write it - about a year and a half altogether.

Did anything about the experience of writing a book surprise you in a good or bad way? Did you feel like you learned a lot along the way or do you feel like you had a pretty good handle on the statistics beforehand?

This is my first book but I have been involved in a lot of research and writing projects at work. So, I was not too surprised by anything. I knew it was going to be a lot of work. Only about half the work is creative writing. The other half is comprised of editing, data checking, formatting, etc.

I did have a pretty good handle on most of the statistics before hand but I also learned a lot along the way. I read everything I could that others have written about statistical methods and have come away more educated than I was before. I think even some of us more mathematically inclined fans have been making some incorrect assumptions about how to interpret some of the statistics. So, I hope to clear some of that up with the book.

How did you come to be a baseball fan, and why is a guy from Massachusetts such a Tigers fan?

I have been a baseball fan since I was five years old in 1968. I grew up in Massachusetts and all of the neighborhood kids were big Red Sox fans especially after they won the pennant in 1967. My father was a Cardinals fan, so they were actually the first team that caught my eye and I was a huge Lou Brock fan for a while. I've always been a contrarian though even at that early age! So, I needed my own team - one that was different from my father and my friends. The Tigers had a great team at the time so I chose them. They won the World Series that year and I never turned back.

How did you first get involved in looking so closely at baseball stats?

I was always a fan of baseball statistics but I first started getting interested in the more advanced measures in college. I was studying mathematics and statistics and some of my classes required me to apply the methods to real data. So, I chose baseball and it turned out to be a great opportunity. I got a chance to prepare for my career as a research analyst while learning more about baseball at the same time. This was all happening at the time Bill James was writing his abstracts so he was a big influence as well.

It is my understanding that baseball teams are using sabermetrics in their decision making more than they were a decade or two ago and that their methods are more sophisticated than some fans realize. Another thing that I've noticed the last few years is that the media and fans have become more curious. I have been pleasantly surprised to see references to measures like WAR and UZR even at mainstream sites recently. However, I think the advanced statistics are not always being used correctly. Getting people interested in sabermetrics was a big step. I think the next step is education and that's where my book comes in.

What do you say to people who think sabermetrics are just for nerds who want to make the game too complicated? Can we balance what we see with our eyes against what we can see in unique baseball stats? Can the two live together?

I'm seeing more curiosity and less resistance to sabermetrics the last couple of years. My response to the skeptics is that every team employs sabermetricians who inform their decision making. Thus, I think it makes sense that more fans would also be interested. The purpose of statistics is not to make the game more complicated but to help us learn more about the game.

At the same time, I do think baseball fans are very intuitive and can be very knowledgeable about the game just by observing. I think that observation and analysis go together hand in hand. Every new advancement in statistics needs to be tested not only by data but also by observation. There are times where the statistics tell us something different from what many people are seeing. Sometimes observations are deceptive but it's not a good idea to just assume that the statistics are correct. When the observations and statistics disagree, I think more work is needed to figure out why they disagree. Many times observations can inform the statistics and we end up with more accurate measures as a result.

Anything else you'd like us to know that I didn't ask?

I think we have covered just about everything Kurt. Thanks for taking the time to ask me some questions about my book.