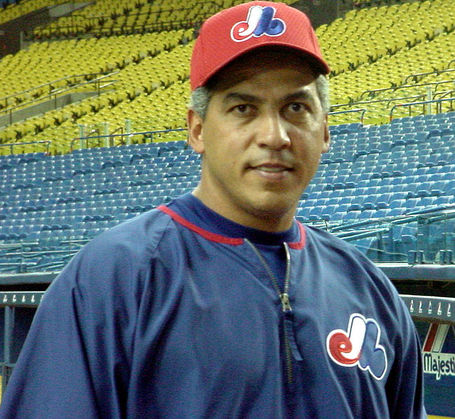 "Big Cat" Andres Galarraga may be best known for his chase for a .400 batting average he had in Colorado in 1993, a highlight among the 19 seasons of his career. More recently, he could also be known for coaching the Venezuelan national baseball team.

Now, among Tigers fans, he might the opportunity to be known for another reason: mentoring Miguel Cabrera, or "Miguelito," his term of endearment for the Tigers' slugger.

MLB.com's Jesse Sanchez reported Friday Galarraga will likely attend the Tigers' spring training in Lakeland, which begins later this month, to help Cabrera through his personal battles. Galarraga is willing to work for Cabrera for six weeks in Florida, but would prefer not to spend the entire eight-month season away from home.

"Maybe it's one of those things that Miguel is interested in me continuing to help him," Galarraga said. "It seems [general manager] Dave Dombrowski and manager Jim Leyland think it's a good idea."

"Miguelito is preparing himself. After the rehabilitation, he's coming in the best condition," he said. "Miguelito has been a superstar since he started and now he's prepared mentally and physically. I believe he's going to have an explosive year."

The article also says Galarraga helped Cabrera in the 2009 World Baseball Classic as he transitioned from third base to first base and served as a mentor at the tournament.

MLB.com's Jason Beck added to the story at his blog last night.

If it happens, it would be an interesting match of one of Venezuela's most revered players and the young star whose talent has drawn comparisons with Galarraga ever since he was a teenager.

And the bow the ties the entire story together?

Galarraga began his career with the Montreal Expos, where Tigers GM Dave Dombrowski was at the time director of player personnel and later general manager.

Not much to add by me. Obviously, what's good for Cabrera is good for the Tigers. It should be interesting having a personality like Galarraga's -- he also works as a baseball analyst in the media -- around for awhile. I am glad to see Cabrera is getting all the help he needs after his problems in October.