I left the game early to catch a flight home, so I don't have a ton of photos of this one.

Jason and I headed over to the park way early, I mostly did so since I knew it was my last day. We hung around the back field and watched a bit of batting practice, then up to the berm to see some more on the big field, then snuck back around the back field near its dugout area. Wendy and I got ourselves a few autographs, and I got a photo with Miguel Cabrera. I asked him for an auto on his way in and he said he had work to do, and as he exited the field he walked directly towards myself and other fans and nodded to us to come over. I really appreciated him doing that, as it was after noon and he obviously needed to go get dressed for the game. He said he's excited for 2010.. in addition to that Scott Sizemore says his ankle is pretty good, and Austin Jackson has not been thrilled with the high winds in Lakeland lately. Breaking news for us all, I'm sure. But it was fun.

- Like I said, Scott Sizemore was one of the other guys taking extra BP today. They all got some instruction from Mr. McClendon and then Scott hit a leadoff home run. Miggy hit one later in the first inning. Nice!

- Armando is so frustrating. I caught myself saying and/or thinking "whew, nice pitch" on a few of the strikes he threw.. the problem is, he's so inconsistent. Don't know what else to say about that. Thankfully, he didn't fall into that awful snail's pace he gets into when he's having a bad day, otherwise I would have yelled other obscenities at him in addition to "THROW STRIKES!" or something.

- Jacob Turner looked good again. His fastball was around 92-93mph and reached 95 at one point (I paid more attention to the radar reading today since it's out in RF and we sat near 1B). The best part: when he has trouble finding the strike zone, he does not get upset and simply does his best to make the correct adjustments. He doesn't throw harder to try to get out of jams.

- I hope Brad Thomas was just having an off day because he was, uh, not so good. I thought I remembered him doing okay in his last appearance though, but I'm too lazy to look it up.. hoping to see better things from him later.

- Brennan Boesch hit that home run while I was on my way out, in the parking lot. I know I'll have plenty of chances to see him display his power, but damn it, I was hoping to this week!

Today's photos are here. Sneak preev after the jump. 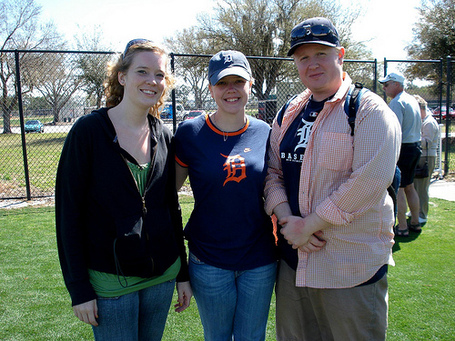 BYB crew! Left to right is Wendy, me, and Jason. 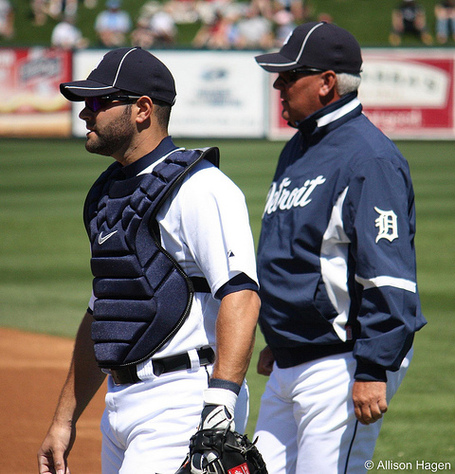 Grounds crew dancing. I am a self-professed "get off my lawn" type, I hate cheesy ballpark stuff after the first time I see/hear them, but at Joker Marchant the grounds crew comes between innings around the middle of the game to tidy up and "YMCA" is played over the speakers. They stop during the chorus to do the YMCA dance and, obviously, party down. It's hilarious.

I want to add a quick thanks to everyone that's commented on my posts about spring training, I can be a bit of a perfectionist (even with my half-assed semi-professional setup) so I'm glad that people like looking at them as much as I like taking them. It also means a lot to me that you're willing to read my weird style of writing, too. :)