How Johnny Damon will fit in at Comerica Park

Share All sharing options for: How Johnny Damon will fit in at Comerica Park

Yes, ladies and gentleman, Johnny Damon is the gift that keeps on giving.

Yesterday I came across a wonderful Ball in Play Location tool via Tom Tango at The Book Blog. One of the biggest knocks on signing Damon was that he was a product of the major home run spike in Yankee Stadium the Sequel and that won't translate to Comerica Park. Whenever I read things like that, I often wonder if that's true. Bill Ferris has touched on this when Damon signed, but I've got a clearer graph and slightly different results.

What we'll see below is Johnny Damon's homers he hit at home for the Yankees last year, super-imposed onto the dimensions of Comerica Park. 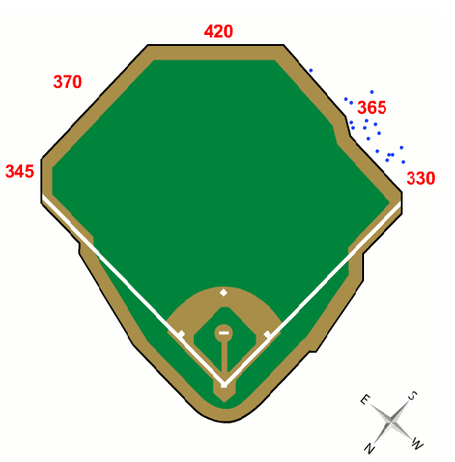 By my count, I see zero dots touching the wall. But, don't always believe what you see (entirely). One flaw of this tool is that it doesn't account for atmospheric conditions -- maybe every single one of those balls were hit with a jet stream wind that doesn't exist anywhere in the entire universe outside of the Bronx. If you listened to ESPN talk about it for the first two months of the 2009 season, that's what you'd be led to believe. Bitterness of ESPN beating a story into the ground aside, there are other concerns with this tool. I'll let Mitchel Lichtman outline those:

Batters and pitchers, I believe, pitch to the strengths and the weaknesses of the park. And the batting eye, visibility and the size of the foul territory of a park can significantly affect the character of the batted balls. The other problem is the atmospheric one. No one seems to know the real wind patterns inside of any park. That can be a pretty big problem. Basically, it is not as easy and clean as you might think. Trust me, I’ve tried it…

Also, you must beware of the diagrams themselves as there may be some scaling problems.

But, even if you account for that, there are really only three homers that would be border-line in my mind. That would leave 14 more long balls that look pretty substantially over the fences in CoPa.

I say this because Damon's changed the type of hitter that he is. Bill Ferris' post I linked to earlier also had this nugget of data:

Since 2007 he's increased the amount of balls he hits to the pull field nearly 20%. This is also evidenced, in my opinion, by his increase in strikeouts. From 1995-2005, Damon averaged 64 strikeouts per year. Since 2006, Damon's averaged 86 K's. I would attribute this to getting older, but also his shift towards being a pull-hitter. To pull the ball, he's must start his swing sooner to be out in front of the baseball, thus giving him less time to wait on a pitch. The less time you're taking before committing to swinging, the increased chances you'll swing at a bad pitch.

Then again, I'm not a swing coach. I just think the demise of Damon's power is being over exaggerated by the general populous.