Before the Tigers got to the Royals' bullpen, they appeared destined to lose. But Carlos Guillen capped off a six-run Tigers rally in the seventh inning and Detroit held on to win.

The Tigers still struggled early on against opponents' starting pitchers -- though they did eventually get to Luke Hochevar yesterday and the bullpen did Brian Bannister no favors today -- and they still come back against the bullpen.

Neither trend will hold, I'm sure. But ride the wave while it's there, right?

So digging a bit deeper, I conclude I can't conclude a thing about Dontrelle Willis yet.

So far, he's pitched adequate, and it has been said here and elsewhere, what do you expect from your fifth starter? He gave up four runs in five innings on nine hits and three walks. Sounds like a fifth starter to me.

Of course, I continue to be on the lookout for warning signs that Willis is about to fly apart at the seams. Today, for instance, he flirted with disaster early on. He got a bit worried. And he gave up too many runs. But he managed to pull himself back from the brink and even touched 95 miles per hour with his fastball.

None of the above means that Willis has turned the corner. I don't think people should be grading him on a curve. He doesn't deserve that, especially given his struggles the past year. But you also cannot conclude the Willis Experiment will end in failure either.

So far, so adequate. We'll take it.

Hopefully the Tigers find a way to be better than adequate when they start facing bullpens other than the ones in Cleveland and Kansas City.

With an assist to TigerDog1 for his April in the D comment comes this one from rea: 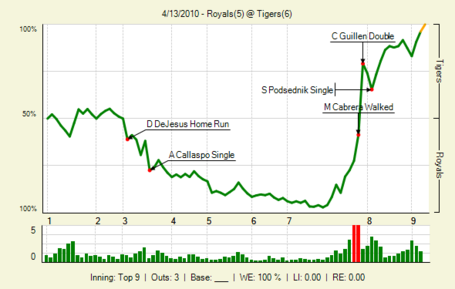