Tigers lose both the game and series to the Royals, 7-3

Share All sharing options for: Tigers lose both the game and series to the Royals, 7-3

Jose Guillen took Tigers pitching out of the park...again. The Tigers defense kept a Royals inning alive...again. The Royals beat the Tigers...again.

Add it all up, and you have an ugly 7-3 Tigers loss to end what was a fairly successful 4-2 homestand.

The turning point of today's game happened in the 7th inning, with the score 3-3. Ryan Perry was on the verge of getting out of the inning unscathed, as Magglio Ordonez looked to have thrown out David DeJesus at the plate for what should have been an inning ending double play. 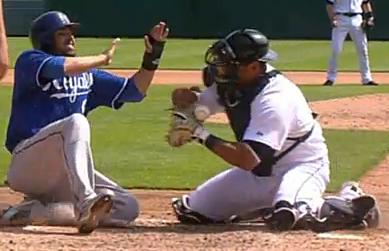 DeJesus should have been out by an easy 5 feet, but Gerald Laird outright dropped Ordonez's perfect throw. DeJesus was safe, the Royals took a 4-3 lead, and the inning was extended. The hotter than Hades Guillen then stepped up to the plate, and smoked a Perry pitch out of the park. The Royals tacked on a couple of insurance runs in the 8th and 9th, but for all intents and purposes, Guillen's homer was the nail in the coffin.

The Tigers tried to make some noise in the bottom of the 8th, as Brandon Inge and Scott Sizemore walked. Could it be time for another come from behind rally?

Rick Porcello wasn't his sharpest, giving up 3 runs while scattering 10 hits in 6 inning of work. But a quality start is a quality start. Perry was tagged for a pair of runs that could have been considered unearned, if Laird had used his catchers mitt correctly. Phil Coke fizzled, allowing the Royals a pair of insurance runs.

Offensively, it wasn't very pretty either, as the Tigers reverted back to their squandering ways. Miguel Cabrera grounded into a double play with the bases loaded and no one out in the 5th, and ended another scoring threat with a fielder's choice in the 7th. As I mentioned earlier, Kelly left the bat on his shoulder with 2 on in the 8th. Gerald Laird, who is no longer known as G$ in the game threads (he's now G-I-Wish-He-Could-Hit), continued with his losing struggle to reach the Mendoza Line. His 0-3 day left him hitting .120.

The one bright spot offensively was Maggilo Ordonez, who hit his 3rd home run of the season in the 1st inning. Maggs is already 1/3 of the way to his '09 home run total (which isn't really saying much, but still...), and looking for all the world like the offensive force we saw from 2006-08.

This was not the way I wanted to see the Tigers first homestand of the season end, but a 4-2 record is nothing to be upset about. What I am concerned about is the upcoming few weeks. There's the 11 game west coast road trip, only 6 home games out of the next 22 and the fact the Tigers have only one day off between April 16th and May 24th.

That's a scheduling gauntlet, folks. We're going to see just what the Tigers are made of over the next month.

There were quite a few gems sprinkled throughout the despair, so it was a tough call. After Don Kelly K'ed to end a possible 8th inning rally, it was asked by SabreRose Tiger if Kelly took strike 3 down the middle. StringTheory said the pitch was off-center by an inch or so. playoff beard then shot back with a one-liner...

Between you and me, Don Kelly wouldn't be my first choice (or second...or third) as a late-innings pinch hitter. Unfortunately for us, he was for Jim Leyland.