Nothing is going right for the Tigers on this road trip to .500.

Monday night the Tigers wasted a good performance from Dontrelle Willis thanks to a lack of hitting with RISP in a 2-0 loss to the Angels. Tuesday night was a 180. Rick Porcello did not pitch well at all, but the bats did come alive, if only for a couple of innings.

But breaking their 15 inning scoreless streak (over 3 games) wasn't enough, as the Tigers fell to the Angels 6-5. To rub salt into what has become a gaping wound, former closer Fernando Rodney picked up an easy save for the 2nd night in a row. Ouch...

The slumping Tigers are 1-4 on what's turning into a disastrous west coast swing, and dropped to 7-7 overall, 3 games behind those damned Twins in the Central.

So what was the story of the game?

The inability to get a big hit is the obvious one, but it has to be the ineffectiveness of Rick Porcello. The young right-hander gave up 6 runs, 8 hits and 2 walks in 4.1 innings. I'm aware it's too early in the season to be alarmed over Porcello's slow start, so no panic buttons need to be pushed...yet.

Going into this season, the Tigers were counting on Kid Rick big time. Maybe counting a tad too much on a 21 year old with all of 1 season of big league ball under his belt. Could the pressure be getting to him? Was last season too much too soon? Has the league started to figure him out? All questions we may be asking down the line, as we've yet to see the same Porcello who was a standout in 2009.

Porcello's1.78 WHIP in 3 starts, after having the heaviest workload of his career in 2009...well, I'd be lying if I said I wasn't a little concerned.

Offensively, this game began as the previous ended. With the Tigers squandering scoring opportunities at will and with malice.

1st inning: Runners on 1st and 3rd with 2 out. Carlos Guillen pops out to shallow right, ending the threat.

2nd inning: Ryan Raburn triples with 1out. Gerald Laird proceeds to the ball hard (Shocking, I know!), but right at 3B Maicer Izturis. Adam Everett ended the inning with lazy fly ball to center.

The disturbing lack of clutchiness continued unabated, with the Angels building a 6-0 lead...until the top of the 6th.

Brandon Inge came through with what was thought be mythical, like a unicorn or a Detroit Lions winning season, the 2 out hit with RISP. Inge's double drove in 2 runs. You could hear the cries "FINALLY" all over Tiger Nation! The RISP drought had ended.

It wasn't a coincidence Inge's hit came immediately after the Angels pulled starting pitcher Scott Kazmir. It's become the Tigers MO, punishing the opposition's bullpen after struggling against the starter.

The thumping of relievers continued when Miguel Cabrera clubbed a bases loaded, 2 out double in the 7th, making it a 6-5 game. Unfortunately, that's where the comeback ended. Cabrera was stranded at 2nd, as the Tigers lost the knack of hitting with RISP as quickly as they found it.

In the 8th, squandering returned with a vengeance. He of the fauxhawk and the ugly white and silver spikes, Johnny Damon, stuck out with ...you guessed it...2 out and RISP. Austin Jackson and Ramon Santiago were left standing on 2nd and 3rd respectively, essentially ending the game. (Though I have to add the strike out pitch looked ridiculously outside...)

Again, as we've seen in most every loss this season, the opportunities were there for the Tigers. For whatever reason, their bats just couldn't convert.

The lack of hitting with RISP is quickly becoming the story of the season.

Immediately after Brandon Inge's run scoring double, explosivo2k2 said it all with an exquisitely timed picture: 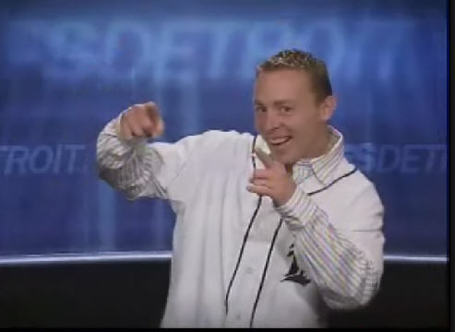 This may be the best picture ever taken...in HISTORY.