I don't know how they're doing it, but the Tigers absolutely own opposition bullpens. The pwnage happened again in their wild, come from behind, last at bat, 4-3 win over the Angels in Anaheim.

Thanks to the heroics of Miguel Cabrera (who appears primed for a MONSTER season), Carlos Guillen, Ramon Santiago and yes, even Gerald Laird, the Tigers scored 2 runs in the top of the 9th to give the Angels' fresh off the DL closer, Brian Fuentes, a blown save in his first save opportunity. (That did not go over well with the fans in Anaheim)

The 9th inning fireworks began with the Tigers down 3-2, and Cabrera leading off. He took a Fuentes' pitch so far over the left field wall...well, it's currently flying over the Pacific Ocean as I write this post. Yes, it was hit that damn hard, and it tied game at 3-3.

Then things got a little crazy.

Guillen (who also had an RBI single in the 6th) singled, then stole 2nd base while a pinch hitting Brandon Inge struck out. Laird did what we've been wanting him to do since the middle of last season...not swing his bat. He didn't, and took a base on balls.

With Ramon Santiago at the plate, Guillen had happy feet, ready to steal 3rd. Didn't happen, as the pickoff play was on for the Angels. But Guillen kept himself alive long enough for Laird to make it to 2nd base. Staying alive in the run down turned out to be a game changing play.

With the count 0-2, Santiago picked Fuentes' pitch damn near off the dirt, and sent a lob wedge over shortstop, the ball falling in front of a charging Bobby Abreau. Being there were 2 outs, the last thing I expected to see was a catcher lumbering around 3rd on a left field Texas league single with the game on the line. It must have shocked the Angels and Abreau as well, as Laird beat a good throw with a textbook head-first slide, getting his hand on the plate ahead of the tag. (Head to DetroitTigers.com for the video)

It was as spectacular as it looks in the Fangraphs win probability graph: 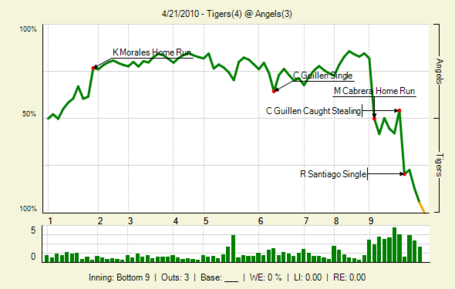 See what you get for going to bed early? Who needs things like jobs, college classes or sleep?

Against the Angels, Jeremy Bonderman was the Bonderman of old...which includes blowing up in the 1st inning. He allowed 3 quick 1st inning runs, 2 of which scored on a bomb of a home run by Kendry Morales. Bondo then settled down to throw 5 shutout innings, keeping the Tigers in the game.

That is definitely prime-time Bonderman. You have to take the early bad with the later good.

The bullpen continued with their stellar pitching, as Eddie Bonine, Phil Coke (who picked up his 2nd win in relief) and the Big Potato, Jose Valverde, shut out the Angels in the final 3 innings.

The other Tigers standout was Don Kelly (Yes, THAT Don Kelly), who started the Tigers comeback with a solo home run to deep center in the 5th of off Angels starter Jared Weaver.

So the Tigers avoided disaster with another come from behind victory. They now stand 2-4 on the 11 game road trip, with Justin Verlander scheduled to the take the mound Thursday night. All of a sudden, things don't seem quite so bad, huh?

There's nothing like a come from behind win to make you feel better about the Tigers, and life in general.

This gives me a chance to mention Johnny Damon, who was called out on strikes with 2 out and the bases loaded in the 5th.The fauxhawk wearing one made a bit of a scene at home plate, and got himself tossed by umpire Dale Scott. (The consensus in the game thread: It was definitely a ball) I don't know if the ejection got the Tigers fired up, but it sure got the BYB night owls going.

One of the fired up was tplants, who chimed in with:

…why we let the outcomes of these games depend on the touchy egos of chubby white guys with power issues.

Couldn't agree more. Umps tend to fancy themselves as part of the action, instead doing what they are supposed to do...make the correct calls, be consistent, and fade into the background.