Double your pleasure, double your fun: Tigers double their way past the Twins,11-6

Share All sharing options for: Double your pleasure, double your fun: Tigers double their way past the Twins,11-6

If it's possible for a game to turn on one single, solitary play, we saw it in the Tigers 11-6 victory over those damned Twins.

The Tigers had already battled back from a 6-1 deficit to make it 6-5 as the game entered the bottom of the 6th. With Austin Jackson (K-less for a 2nd straight game!) on 1st, Johnny Damon hit a high drive to deep left center.Twins CF Denard Span covered a ton of green, and looked to have made a very nice running catch...but the ball popped out of his glove. It was ruled no catch by the umpires, allowing Jackson to scamper to 3rd and Damon to advance to 2nd. 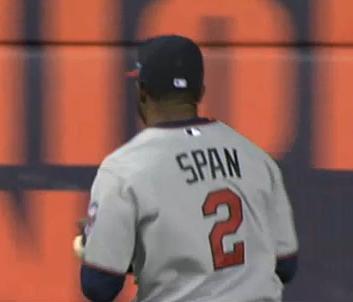 Captain Kangaroo Ron Gardenhire vehemently argued the call, claiming Span had caught the ball, only dropping it while trying to make the exchange to his throwing hand. The umps didn't agree (To be honest, replays showed it quite likely was a catch). Gardnenhire got himself tossed and the proverbial floodgates opened for the Tigers.

Twins reliever Pat Neshek proceeded to walk Magglio Ordonez, then hit Miguel Cabrera with a pitch, tying the game. Jesse Crain was summoned from the bullpen to stem the Twins' bleeding, but the Murderer's Row of Brennan Boesch, Brandon Inge and Ryan Raburn were due up. Boesch doubled home Damon and Ordonez, Inge (who also homered) doubled home Cabrera and Boesch, and Raburn's double, the Tigers' 6th of the game, drove home Inge.

All that was missing from the double-fest were the Doublemint Twins and a screening of Double Indemnity.

What had once been a 6-1 Twins lead had become a 11-6 Tigers rout...all thanks to Span's questionable error.

Revenge for game 163? Hardly. But it sure felt damn good.

If there was an unsung hero in the win, it was Brad Thomas. Yes, the same Brad Thomas who has been considered the bullpen's weak link.

Thomas took over for a very ineffective Max Scherzer (3.2 IP, 10 H, 6 ER), and proceeded to shut down the Twins' bats. The much maligned Thomas tossed 2 1/3 shutout innings, keeping the Tigers in the game, which ultimately allowed the Comeback Cats to once again hammer an opposition bullpen.

Phil Coke and Jose Valverde finished off the victory and another sterling performance from the Tigers relief corps. The downside being the bullpen had to throw another 5.1 innings, stressing an already stressed group. If this keeps up, the bullpen will be toast before summer arrives.

But that's a worry for another night. Tonight we celebrate finally beating those damned Twins.

Magglio Ordonez finished with 3 hits, leaving him 1 short of the 2000 hit mark for his career.

Alex Avila had another hitless game, dropping his average to .097. There's a trip to Toledo likely coming soon for the the anointed one.

Remember all the gnashing of teeth over the Tigers' issues with RISP? They were 6-17 with RISP against those damned Twins. It's all starting to even out.

The ever prolific ChrisDTX sorted out some ownership issues with one of the Twins' players.

The Pohlads write the checks

Pure pwnage by Maggs and ChrisDTX.