It was an odd, very odd, game in Milwaukee today, and I'm not just talking about the football-like score.

The Tigers staked Rick Porcello to a 5-0 lead against the Brewers. Kid Rick, as has been his M.O. this spring, did his part with a scoreless 4.1 inning performance.

Then all Hell broke loose.

Joel Zumaya replaced Porcello, and faced 5 batters in the 5th. All 5 reached base, all 5 scored. But Zoom was not the only Tiger at fault. He should have gotten out of the inning unscathed. Ramon Santiago committed an error on what should have been an inning ending double play ball, setting up the Brew Crew's big inning.

Phil Coke replaced Zumaya, and nothing changed. He recorded only 1 out, while 3 more runs scored.

While all this was going on, the Tigers hit 4 home runs. Magglio Ordonez, Austin Jackson, Ryan Raburn and Danny Worth all went yard with 2 run shots.

Then Jeff Larish hit a leadoff home run in the 9th, the 5th of the day for the Tigers, as part of a 3 run inning, giving the Tigers a 12-9 lead.

Robbie Weinhardt came on for the save...and blew up in Zumaya-like fashion, allowing 4 runs. The winning run scored when Weinhardt booted what would have been an inning ending out at 1st base. His error kept the game out of extra innings...which was best for all concerned.

Jim Leyland put the whole mess into perspective during the post-game media scrum.

"We just out-uglied them," he joked. "We were both pretty ugly."

Like the Marlboro Man, I've already forgotten this meaningless game ever took place.

Before the game, Leyland was asked about the pair of rookies the Tigers are heavily depending upon, Scott Sizemore and Austin Jackson, and did his best to lower expectations.

The man sure knows how to turn a cliché, doesn't he?

Despite madpoopz campaigning for the CotN, I have to give it to the duet of ScarletP and the pie man, mrsunshine: 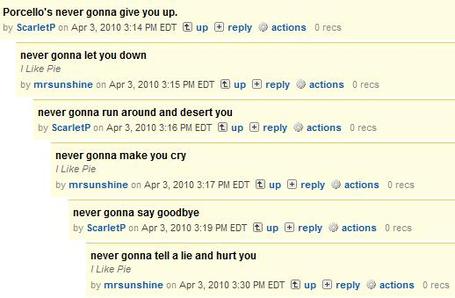 Consider us all rickrolled...