Which Tigers' bullpen resident has been pitching in the biggest pressure situation for the Tigers this season? Hint: It's not the closer.

Technology is wonderful. I can ignore scripted television to watch live sporting events because I can watch any scripted show later on DVR or online. I can get instant feedback on an umpire's strike zone, find out how the opposing pitcher is carving up our lineup (will someone please swing at Francisco Liriano's freakin' slider on the outside corner with 2 strikes? ANYONE AT ALL!) or lurk the interaction of very smart people bouncing ideas off one-another from hundreds (or thousands) of miles apart in this country.

For the latter situation I described, The Book Blog is my hang out of choice. Instant feedback on the ideas that bounce around the sabermetric circle of Fangraphs, The Hardball Times, Baseball Musings, Baseball Analysts, Beyond the Boxscore, Baseball Prospectus, etc etc.

Yesterday, Steve Sommer posted an article at Fangraphs discussing how managers use their relievers. This tickled the fancy of Tom Tango at The Book Blog early in the morning. Tom, though, always wanting to improve, well, everything, offered up some suggestions. David Pinto wrote code into his day-by-day database four hours later. Tom still wasn't quite fulfilled, and then Jeff Zimmerman stepped in to quench his graphic thirst. All of this within a typical work day. If only their bosses knew what they were up to (hopefully none of them are Air Traffic Controllers or something). It's things like this that make me love the internet (especially for baseball research), because I can now take this method and apply it to the Detroit Tigers.

To look at Jim Leyland's bullpen usage through Wednesday, I'll turn to the wonderful Leverage Index which I don't use enough. It is the difference between situations in the game. Bases loaded in the top of the 8th when your team is down by one run is a higher leverage situation than top of the 9th, 0 out and down by 1 run. Fangraphs defines the following leverage index numbers as such:

Pretty straight forward, no? What I'm using is the gmLI which I extracted from the relievers play logs. It's the leverage index (LI) of the first batter faced in each outing for a reliever. This is Jose Valverde's play log page. I use gmLI over pLI because I'm looking for what situation Jim Leyland brings what reliever into. pLI will change because the leverage index changes as a pitcher continues to pitch. For instance, lets say Joel Zumaya comes into the game in the top of the 8th inning with 0 out and no one on base in a tied game -- he's got a clean inning to work with. That has a leverage index of 1.9 -- 1.0 is average, below/above that is low/high pressure situations. Now, if Zumaya in this situation gets the first batter he faces out, the leverage index drops to 1.4. His gmLI in this situation is 1.9, but his pLI is 1.65. The pLI will change the longer the pitcher pitches.

So, graphically, this is what Jim Leyland's bullpen usage looks like when you graph each relievers gmLI by date: 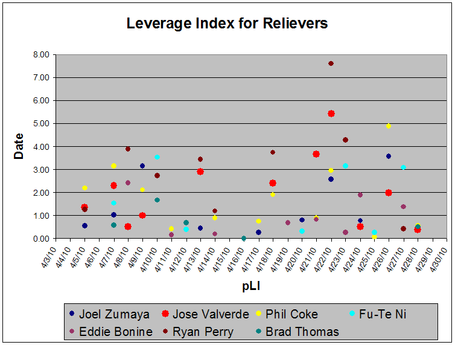 Click the image to enlarge. I know, this is, at first glance, like some 2-D Dippin Dots container. I made Valverde's dots the biggest because he is the closer. Many managers say the closer is the "ace" of the bullpen and, one would think they'd pitch in the highest leverage situations possible, right? Wrong. Few managers do that and some even think that the ninth with no one on base and a 3-run lead is a tougher spot than the 7th or 8th inning with less than a 3-run lead.

Judging by this graph, Ryan Perry has actually come into the highest leverage situations of any reliever in the bullpen as he sports an average gmLI of 2.18 (note: I did not include Dontrelle Willis' single relief appearance or Brad Thomas' emergency start in Texas). Valverde is second, however, with an average gmLI of 1.89 followed by, surprisingly enough, Phil Coke at 1.49. That makes sense if you think about it; Coke often comes in to face the tough left-handed hitter in crucial situations.

Also, if you look at the graph above, you can see who is least trusted in the bullpen: Thomas. This also makes sense given that he's the third LOOGY (Left-handed One Out Guy) in the 'pen behind Coke and Fu-Te Ni. Also, when you remove his emergency start, Thomas has only appeared in 5 times in nearly a month.

For those that get nothing out of the graph, here's a table with pertinent information.

Just because someone is being brought into crucial situations doesn't always mean that they're performing well. I've got a couple of metrics for judging their pitching talent. ERA, Fielding Independent Pitch (FIP) and Expected FIP (xFIP). Personally, I use xFIP for relievers because they pitch so few innings, that two or three rocky outings will skew their ERA or even their FIP.

Perry has been getting the crucial situations but has pitched the worst thus far by any metric (save for Thomas if you're going by ERA). This is because Perry's walked almost as many as he's struck out (7 to 6) but it hasn't come back to bite him yet given he's got a great 54.5% ground ball rate. This has led to an 88.1% Left On Base Percentage which is likely to drop -- league average is around 71-72%.

Perry's pitched poorly in general, but Zumaya's been beyond fantastic. His xFIP is higher than his FIP because he's yet to give up a homer this year where if you apply league-average home run per fly ball rate (HR/FB, league average is around 10.6%) he "should" have given up 1-2 so far. However, that 2.52 xFIP is great -- and sustainable if he can continue to walk as few batters as he is doing this year.

I give Jim Leyland's decisions a lot of guff, as I don't particularly agree with them much of the time -- though I can follow his reasoning for most of the moves he makes. That said, Leyland's been pretty good at his bullpen usage in 2010, though I'd like to see Zumaya and Perry switch rolls if their current trends continue. I'd suspect, though, that if Zumaya continues to be lights out, their roles will get switched soon enough.