One of our Bless You Boys familiar faces went to the Tigers' season opener on Monday and was kind enough to write up his thoughts. They follow. As always, drop me an e-mail if you are doing something cool like that and want to do a guest post -- Kurt

Having recently relocated to North Carolina from West Michigan, major league parks are not near to me. So I hatched a plan to fly to KC to see the Tigers open their 110th season. Got a good seat on the third base side made the game just in time and, of course, saw a win. Better yet on the flight home I took a bump and got an airline voucher that might allow another trip to see the Old English D's this time perhaps in Comerica!

Rookies: Austin Jackson and Scott Sizemore both made their major league debuts. Last time a similar dual debut occurred was in 2007 when the Devils Rays had Elijah Dukes and Akinori Iwamura in their first game line up.

Right from the start both were patient hitters. For the game Jackson saw 26 pitches while Sizemore faced 22 from Royals hurlers. 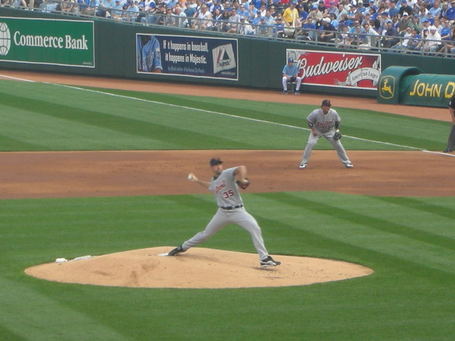 Verlander pitches during the season opener.

In the decisive seventh inning the raw rookies were big in the rally. Sizemore led off with a walk and then scored on Jackson's double.

The last Tiger to win the MLB's American League Rookie of the Year was Justin Verlander in 2006. This years pair will get a full opportunity to become the next ROY.

Speaking of Verlander: No question he threw hard and at times really well. Still those factors did not end up making a good outing. Perhaps the fact that Yuniesky Betancourt he of 32 career home runs parked one to CF off JV sums up the fact that the stafff ace was not fully on his game. Five innings and four runs does no equal a quality start.

Damon Hitting Style: Johnny Damon had two hits in the stadium where he started his successful career. From my seat his hitting style looked a little awkward.

It appears as though his body turns as if to pull the ball while the bat drags slowly as if to go to opposite field. During this process the bat does not look quick. However, I am a mere glasses-wearing critic while 'the Idiot' now has 2427 hits!

By the way anyone else think Johnny Damon 'Runyan' is a good nickname?

Major League Pop Ups: I can't say I am a regular visitor to major league stadiums. On the occasions that I am one of the things you see that TV doesn't portray is a true major league pop up.

The pop up hit by Guillen that resulted in an error and a run was truly major league. It went way up, straight appearing easily to be higher than Kauffman Stadium's upper deck. It was a windy opening day and I think it got moved laterally by the breeze. Zack Greinke didn't see it -- can't blame him -- and it was missed by the third baseman on the mound. You don't have a true version of that play unless you were at the stadium.

BTW....who else loves those MLB Network Diamond Demos. I saw one on the proper way to play an infield pop spurred by this play and another good one with Barry Larkin on how the soft toss drill for hitters is done.

I was most impressed by Ryan Perry. He throws real hard but also real easy. He threw 11 pitches and seven were strikes. By appearances Perry is the economical starter while Verlander is the hard throwing max effort reliever.