If you've followed me over from my own blog, you know that I love a few things: Sabermetrics, PITCHf/x, and graphs. Well, if you consider PITCHf/x under the sabermetrics umbrella, I am getting the chance to combine all three right now in looking a bit closer at Max Scherzer's first start as a Detroit Tiger.

Before we continue, a very quick, very simple explanation of PITCHf/x in case you need a refresher or aren't familiar with the system. Major League Baseball has teamed with Sportsvision and implemented cameras in each major league ball park during the 2006 season. It uses numerous cameras to track the ball from about 50 feet away from home plate, to the very front edge of home plate. It tracks the starting and ending velocity, spin rate, the balls movement versus a ball that isn't spinning, etc etc. It allegedly tracks the movement of the baseball to within one inch of it's actual movement.

Using this system, and a nifty template from PITCHf/x Guru Harry Pavlidis, I've developed a few key graphs that I feel capture most aspects of a players pitching performance under these cameras.

First up, We'll go with a simple strikezone scatter plot. 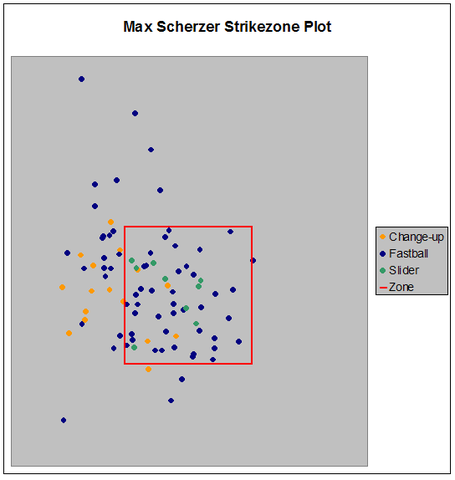 Kind of sensory overload when you first look at it. These are all 91 pitches that Scherzer threw Wednesday.You can tell that he primarily worked off the fastball, but threw more change-up's than he did sliders -- something that surprised me. I thought he was definitely a fastball/slider pitcher, but maybe he uses the change-up more than I had originally thought. More likely, though, it has more to do with him facing four left-handed hitters in the Royals lineup.

Next we have another strikezone plot, but instead of identifying the pitches, it's showing balls and various strikes. 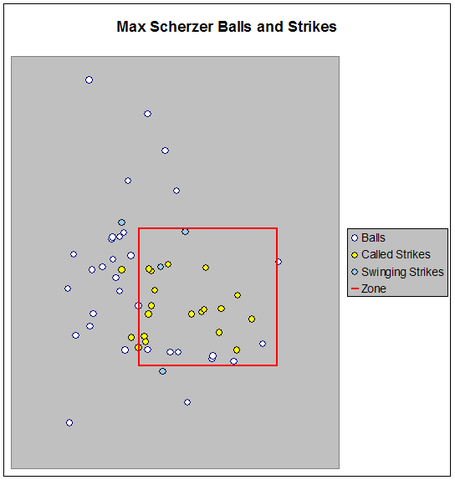 He got a couple of borderline strikes, but that's offset by Fieldin Culbreth's squeezing of the bottom of the zone. That's not a big surprise though, nearly every umpire has quit calling the low strike now-a-days.

A note about the above two graphs: the strikezone is a 2-foot by 2-foot zone which is more indicative of the typical umpire's zone rather than the rulebook zone.

Moving on away from strikezone-related graphs. Below we have the average release point for Scherzer. 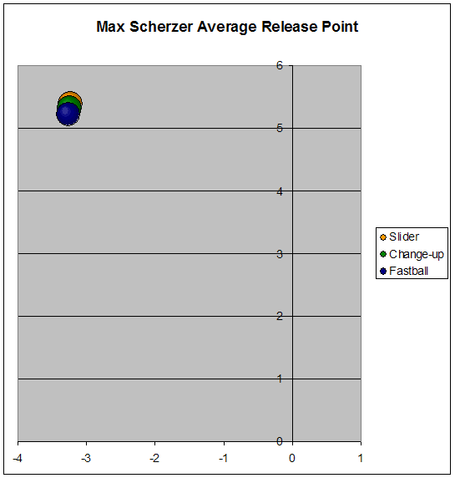 The axis' are in feet and the "release points" aren't entirely the release points. PITCHf/x cameras pick up the ball about 50 feet away from home plate. So while it's not picking it up out of his hand, the ball probably has traveled about 5 feet in the air before it's location is captured. Actual release points probably would be only a couple inches higher than this.

What I see in this, though, is that Scherzer has a three-quarter delivery. Scherzer had an incredibly consistent release point Wednesday, so you can barely see the slider bubble tucked in behind his change-up and fastball. This had a lot to do with the amount of strikes he was throwing against Kansas City.

Speaking of his strike-throwing abilities, here are his pitches split up into various categories. 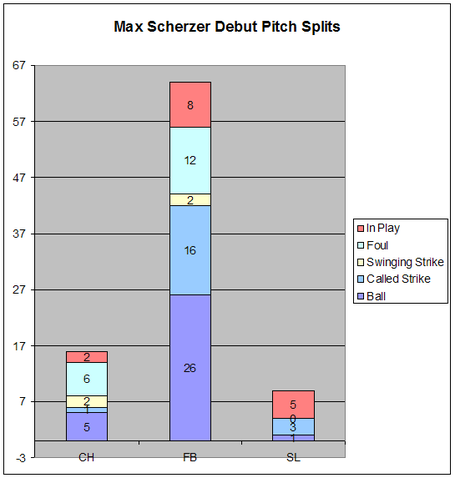 If you combine the fouls, swinging and called strikes, Scherzer wound up throwing 63% of his pitches for strikes. He was pounding the zone -- mostly with the heater -- all night long. 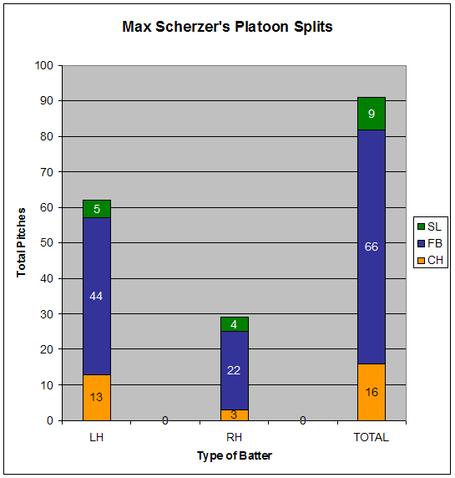 More change-ups and less sliders versus lefties, and basically an even amount against right-handers. Over all, he threw 73% heaters. The league average is normally around the 65% mark, so he was really working mostly with the fastball.

Finally, we reach my favorite graphs: the pitch flights. 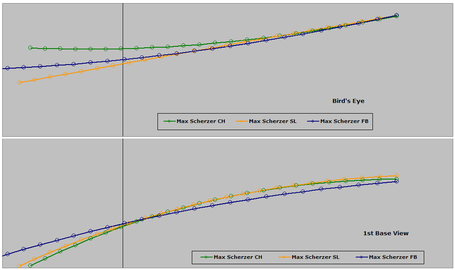 This graph is just as the name indicates: plotting the flight path of the ball from the 50-foot mark, to the front of home plate which is the black line. Think of the dotted lines as the blue tracer line behind the baseball when ESPN show's a replay using their K Zone.

He averaged 92.5 MPH on his fastballs (blue line), though I did not differentiate between a 4-seam fastball and a 2-seam fastball. He hit 95 a handful of times 94 MPH 18 times. So he showed off plenty of velocity. People were mentioning his ball was moving a lot on the two guys he plunked, but I don't think that was entirely the case as his fastball doesn't really move, horizontally speaking, all that much. Not nearly as much as someone like Jeremy Bonderman's. It's not straight by any means, but I think I was expecting a bit more boring action into RHB's. It is relatively flat, though.

Scherzer's change-up (green line) has a good deal of arm-side run, meaning that it moves inward on right-handed hitters. He also gets good diving action on it, and clocking in at exactly 10 MPH slower Wednesday against the Royals, there is a lot of potential for this pitch. I thought he was mostly fastball/slider as a pitcher, but his change-up can be really good. What I like in a change-up is good arm-side run and an 8-10 MPH spread between his average heater and his average change-up and Scherzer meets those qualities.

Finally, his slider (orange line) looks solid as well. He averaged 84.7 MPH on in his Tigers debut and it follows the change-up's flight path pretty closely. This makes it tough to read since it's a few MPH faster, on average, than his change piece. Even a few MPH is a big difference when you have fractions of a second to react. It's not a filthy slider like the Jeremy Bonderman of old, or a great hammer-curve like Verlander can throw, but I think it looked decent enough against the Royals.

Overall, there isn't enough data here to make hard-and-fast conclusions about Scherzer because I'm looking at just one 91-pitch sample. I'll refrain from the dreaded Three S's, but they definitely apply here. It's just as likely that he didn't have a great feel for the slider Wednesday and that's the reason for it looking, in my opinion, a bit worse than his change-up. But, he definitely showed enough to me that his raw arsenal is an upgrade over Edwin Jackson.

Welcome to the Tigers, Max Scherzer.