The first inning Dontrelle Willis was on the mound, it appeared little had changed. He was putting runners on the bases like a host at a popular restaurant but with less selection when it came to the clientele.

Somehow the Royals only scored once despite getting two walks and two hits in the frame. That would be a theme that came back to haunt them, because Willis gave them opportunities to score on more than one occasion. A bit of cosmic payback, perhaps, came in the form of three ground balls that resulted in three double plays.

Willis picked up the quality start by allowing just two runs in six innings, while allowing no walks after two in the first inning and seven hits. He actually settled in quite nicely by his final inning on the mound. More on him in a bit.

The Tigers continued their struggle with the Royals starting rotation -- or if you prefer Brian Bannister continued his strong showing against the Old English D -- but scored six runs off the bullpen in the final two innings to pick up the victory. Miguel Cabrera went 4-for-5 with four RBIs, including a 3-run homer in the eighth inning to give Detroit a 4-2 lead at the time. Magglio Ordonez added three hits and a home run, and Austin Jackson a pair of doubles.

Eddie Bonine and his knuckleball picked up the victory for Detroit. Jose Valverde pitched a 1-2-3 ninth inning for his third appearance in three games.

Of course, what you really care about , I'm sure, is the Willis start.

It was far from a work of art or science. But it was serviceable. His fastball was slow enough to be classified as a change-up by the Pitch F/X system at the start of the game, but worked its way up to 94 mph at one point. Early on, just watching him was enough to make you nervous. Yet by the sixth inning, he was actually dealing quite well and looked for all the world like a professional pitcher. 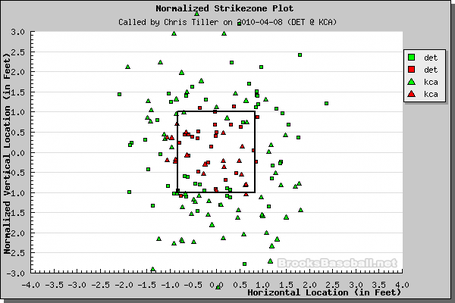 While it was nice to see Willis have successes, you have some reasons to look at this game with concern, too. The Royals offense isn't particularly good, for instance. Willis needed to take advantage of double plays to escape his problems. Another day, those two runs he gave up could very easily balloon up to four or five. That is a bit par for the course for a fifth starter. It's how he reacts to the struggles that will define how long he lasts as a starting pitcher this season.

But so far, we celebrate a successful day for Willis and the Tigers. They'll both be at home Friday afternoon.

Hard not to award the player of the game to the Royals bullpen. Tiger22 gets on the board with this comment:

Think I just got a new favorite player(s)... 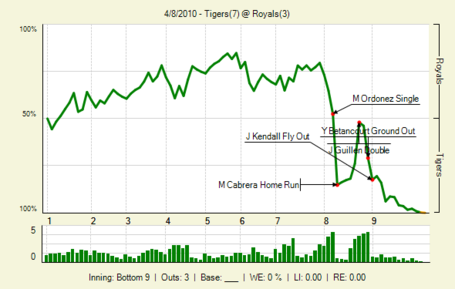