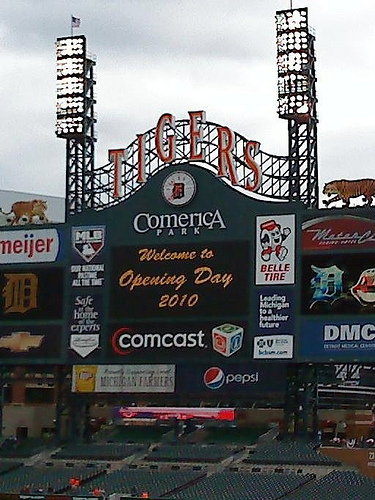 Photo courtesy our own DetroitChik, who is at Comerica Park today!

It's the Detroit opener for the Tigers, and Rick Porcello is being honored for his fine rookie campaign by getting the home start. (Edit: The old man says this is no honor, he had no other choice.) He'll be opposing David Huff who was not particularly notable for the Tribe last year. Huff had a strikeout every other inning or so, a walk every three innings and an ERA north of 5.60

The home lineup is the same as the season opener:

Notable from the press notes on the game:

THREE STRAIGHT WITH AN EXTRA-BASE HIT FOR JACKSON: Austin Jackson picked
up his second and third doubles of the season yesterday at Kansas City, marking the third
straight game he has collected an extra-base hit to begin his major league career. Jackson
joins Alex Avila (August 6-11, 2009) as the only other Tigers player to begin his major
league career with an extra-base hit in three straight games since at least 1920. Only
three major league players have begun their careers with an extra-base hit in four-or-more
games since at least 1920: St. Louis’ Enos Slaughter (five in 1938), Montreal’s Coco Laboy
(four in 1969) and Jason Bay with San Diego and Pittsburgh (four in 2003).