Rick Porcello gave the home fans what they wanted: An opening day win after an effective day on the mound.

And sure, it wasn't always pretty. He found himself behind 2-0 after allowing a home run in the second inning and a two-out run in the fifth. But that's what teammates are for, right?

The Indians' defense had a poor showing in the bottom half of that frame. First, they failed to record an out on a grounder to short. That came back to haunt them when Magglio Ordonez appeared to ground out to end the inning. However, a throwing error by Jhonny Peralta on the play resulted in three runs and a 4-2 lead for the Tigers. They tacked on a fifth run in the seventh inning -- again off the bat of Ordonez -- and held on for the win.

Ordonez and Brandon Inge each had two-hit days. Jose Valverde made his fourth appearance in four games this season, finally recording his first save as a Tiger. Detroit is 3-1 on the season.

It wasn't a real great game for Porcello, who threw just eight first-pitch strikes in 20 batters. He had 16 strikes looking and five swinging, as he had 49 strikes in 87 pitches. He walked two and allowed five hits. He was about even in fly-ball outs and groundouts. And unfortunately, after striking out two in the first inning he had just three K's for the day.

Porcello varied his speed well and got as high as 97 MPH, but flattened out a bit later in the day. He also worked with both his curveball and slider a bit. The Pitch F/X data was a bit incomplete, but here's a glance via BrooksBaseball. 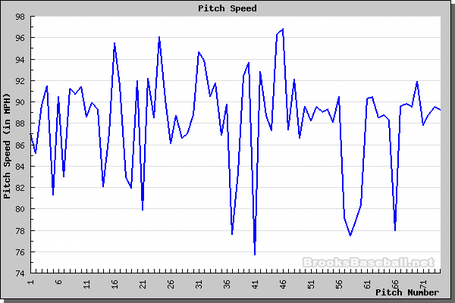 Joel Zumaya had a great showing again. He helped Phil Coke, who walked a pair of baserunners to open the seventh. Zumaya did throw his fastball 85 percent of the time, if you're keeping track of such things.

Disconcerting stat of the day: The Tigers have scored just three earned runs in 25-2/3 innings against opposing starting pitching. You can increase that number to seven runs total when you include defensive miscues. Unfortunately, they can't count on help like that every game.

All three victories by Detroit have been the come-from-behind variety. Certainly you like the fight but climbing back every game isn't going to pay off in the long run.

More reason for concern: The Tigers managed to get runners on second and third base with no outs in the sixth inning without getting a run home. That is quite alarming, actually.

Great stat: The Tigers' bullpen has not allowed an inherited runner to score yet.

Second baseman Scott Sizemore had his first hit of his career: a liner up the middle.

Austin Jackson failed to record an extra-base hit, but he did have an RBI on a ground ball, and he recorded his first career stolen base.

Finally, let me say this about the team. It looks like it could be frustrating as last year's team. But already, it seems like it's going to be a lot more fun. Either because of the personalities or the playing styles of the new players, it seems like a group that will be really enjoyable.

Let's see how I feel after a losing streak, right?

I'm not even sure if I understand it. None-the-less from moonshineboy: 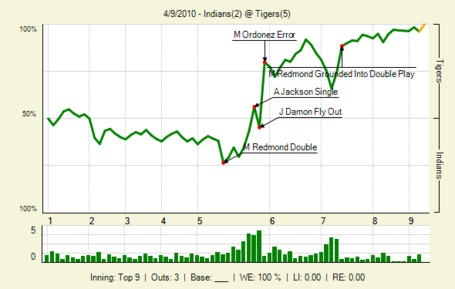