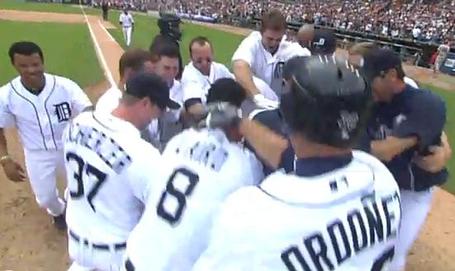 Damon was not rendered unconscious by the home plate beat down...

I could get used to this, though I'll have to invest in blood pressure medication. The Tigers had another heart-stopping, come from behind win against the Angels, thanks to a Johnny Damon walk off home run (his 1st of the season) in the bottom of the 9th off of Scot Shields.

I'm not sure what was more surprising, Damon going yard to end the game, or his throwing out Hediki Matsui at the plate in the 6th. I'd say it's the weak-armed Damon throwing anyone out (though Gerald Laird did most of the work by his imitation of a brick wall at the plate). The outfield assist turned out to be the second most important play of the game, as it kept the score at 2-2.

In fact, today was all Damon all the time. His 1st inning single moved Austin Jackson into scoring position, where he ultimately scored on an Brandon Inge sac fly. Damon also scored the Tigers 2nd run of the game on a Miguel Cabrera double in the 5th.

Is there anything Johnny Damon can't do?

The mound was ably handled by starter Jeremy Bonderman, who scattered 10 hits and 2 runs over 6 innings. and the Tigers' amazing bullpen

Once again, the pen was unscored upon. Eddie Bonine, Fu-Te Ni and Ryan Perry (who vultured himself a win) combined for 3 innings of 1 hit shutout ball.

The Tigers will have an opportunity for for their first series sweep since early April and end their homestand with a 5-1 record when they take on the Angels Sunday afternoon.