Verlander pitches a gem, it must be May: Tigers 5, Angels 1

Share All sharing options for: Verlander pitches a gem, it must be May: Tigers 5, Angels 1

During spring training, Jim Leyland talked about using a visiting manager's office where the calendars were stuck on August. Little did he know, he stumbled into a great way to keep Justin Verlander pitching well all season.

Change all calendars to May before Justin walks into the room.

Hello near-masterpiece to begin May on the right foot.

And this is not just some recent pattern for young Mr. Verlander.

Sunday, he blew through the Angels lineup. After Torii Hunter singled in the first inning, no one reached first base against Verlander until an out into the ninth. And it took a pinch hitter, at that!

Unfortunately, we see how hard it is for a pitcher to get a complete game shutout, and Verlander couldn't hold onto his either.

I don't think you'll find anyone complaining that the pitch-count handcuff Leyland threatened Verlander with lasted exactly zero games. Unless the pitch count was 120, which, just gonna go out on a limb here, it probably wasn't. In any case, the good news is that Verlander was quite efficient for most of the game.

Fortunately, he got the run support he needed during a four-run fifth inning and an extra run in the sixth to come away with the win. And Detroit came away with a fifth consecutive win and a sweep of the Angels.

Onward to Minnesota the Tigers go.

More like Photoshop of the night, really. Grant E made a great poster as the campaign to name Jackson "The Cleaner" continues. Props go to the Boeschwagon, too, from handsomerob1. 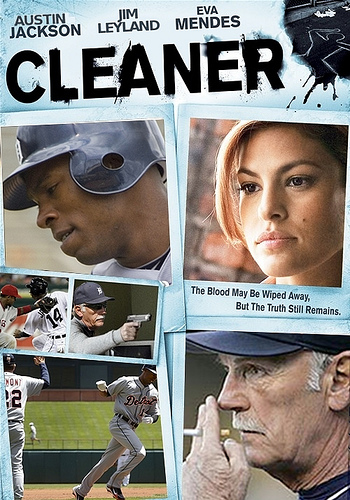