Share All sharing options for: Mighty Max's Gem in PITCHf/x

Max Scherzer sure hadn't made those of us that called him the most important (and best) player the Tigers got in The Trade look too smart through the first six weeks of the season. After a couple of dominating starts in Toledo to regain his pre-2010 form, he came back on the scene with a Sunday gem: 14 strikeouts in just 5.2 innings pitched against the Oakland A's.

I took a look at his Tigers debut back in April through the eyes of the PITCHf/x camera, so I saw it fitting to do the same with the best start from a Detroit Tigers pitcher since possibly Justin Verlander's no-hitter.

First up, let's take a look at Scherzer's strikezone plot (click all images to enlarge). 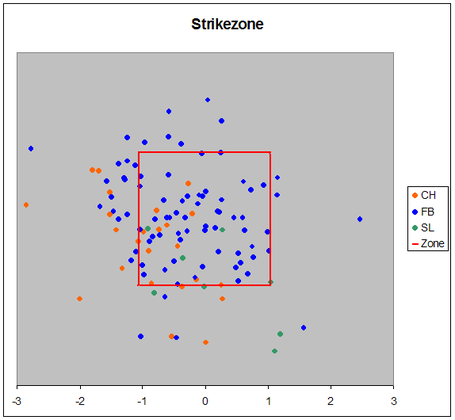 Scherzer really pounded the zone today, firing 62% of his pitches within the 2-foot by 2-foot strikezone I've got above, and that's an above-average number.

Here's his balls and strikes on the afternoon. 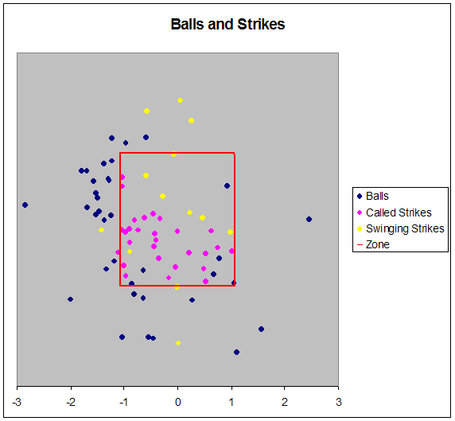 Max didn't get the benefit of any egregious called strikes -- the ones he got were within the 2x2 foot strikezone. He got a ton of swings and misses Sunday, which when you strikeout 14, you're likely to get.

Here I've included Max's swinging strikes, swinging strike percentage. He was pretty substantially above-average on Sunday in missing bats. The 7.8% is pulled from Stat Corner and is the average swinging strikes for a starting pitcher. Whiff rate is the number of swings-and-misses divided by the number of swings and the league rate is pulled from this article by the wonderful Harry Pavlids. To go even further: Max got 9 whiffs on his fastball and that's a .500 whiff rate where the league average on a 4-seam fastball is just 0.164. Max's heater was near un-hittable on Sunday.

Max was great at finding a consistent release point, as well. 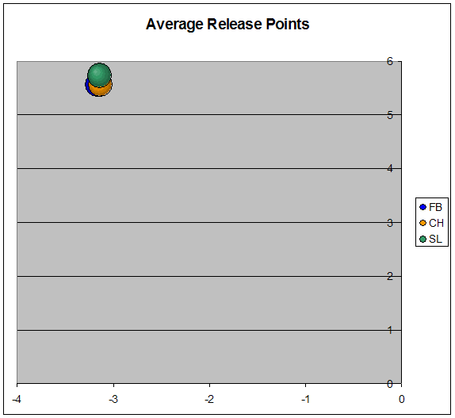 As you can see, there is virtually no difference between his average release point of his change-up versus his fastball. He threw those two pitches the most and fired 3.5 more fastballs than change-up's Sunday.

Now, his arm-slot was one of the things he was working on in Toledo, so did he exhibit a different arm-slot Sunday? 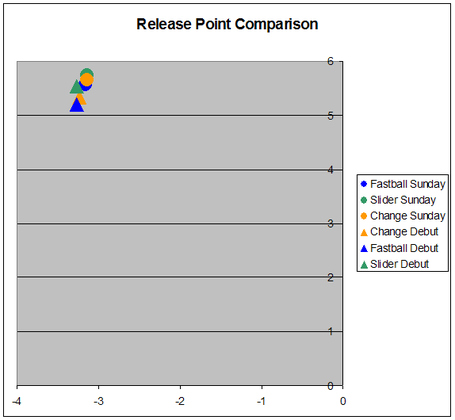 There does seem to be a difference -- Scherzer looks to have raised his release point from what it was in his Tigers debut. Now, the big caveat here is that I did not adjust for park and early in the season there were some PITCHf/x calibration issues. I will return to this issue at a later date.

How'd he change his approach versus left-handed and right-handed batters? Well... 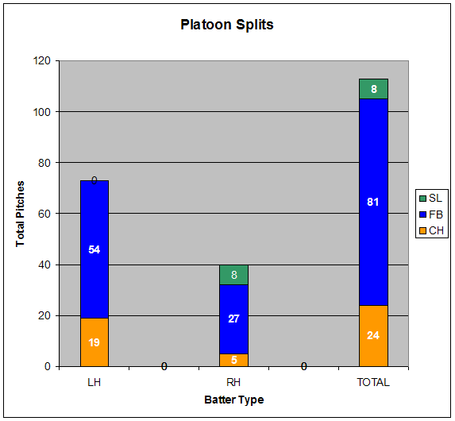 He didn't throw a slider against a left-handed hitter, instead throwing 74% fastballs. Versus righties, he worked in 8 sliders out of the 40 pitches thrown to RHH's.

Finally, we come to the pitch flight paths. 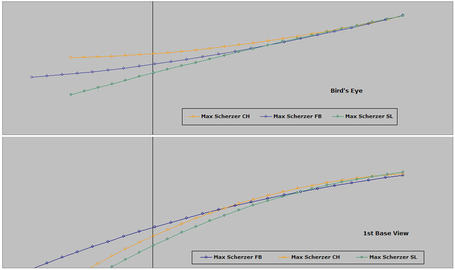 The bird's eye is the pitch flight from above and the 1st base view is if you were watching the ball flight from the first base line.

Things that jump out to be about the flight paths are:

The other big thing? Scherzer's velocity was back. His fastball averaged 94.5 MPH, his change-up was 83.5 and his slider was 83.9. Those are all fantastic velocities and he maxed out 98.7 MPH on a 3-2 pitch in the 6th that was a walk against his second-to-last batter he faced. Before this start, Scherzer was averaging 91.8 MPH on his heater compared to 93.6 in 2009. He's got a big time arm with a big time change-up in all areas considered.

Sunday proved why many of us said Scherzer is the best, and most important, player the Tigers received in The Trade.