As I thought, this game ended up a pitchers' duel. Who'd have thunk it was settled by the end of the first inning?

Justin Verlander's evil twin brother, Jason, made an appearance in the first and allowed the first three A's to reach base on a pair of singles and a double. By the time Justin showed up against Kurt Suzuki and forced a double play, it was 2-0 A's.

Detroit managed just one run -- technically off Trevor Cahill though the run should really be debited to reliever Jerry Blevins -- in the seventh inning when pinch hitter Austin Jackson drove in Brandon Inge.

Five of Detroit' seven hits came off the bats of the seventh, eighth and ninth batters in the lineup. And well, that was that. There's really not much to be said or analysis to be done.

There was one incident, however, where Verlander got into a tizzy with home plate umpire Laz Diaz ...

Essentially, Verlander threw a pair of changeups to A's batter Kevin Kouzmanoff. Both were called balls. Then Kouzmanoff singled to give Oakland a run. Verlander was not happy.

I looked at the Pitch F/X strike zone -- which should definitely not be taken as gospel -- at Brooks Baseball to see if Verlander had a point. Decide for yourself: 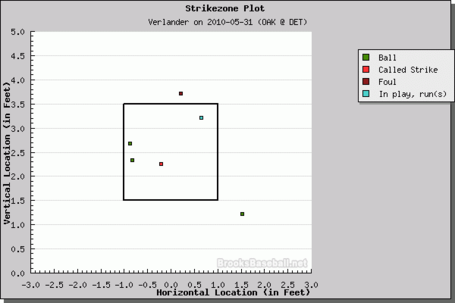 I would say he had some argument there. Of course, both pitches were close to the edge of the plate.

So let's take it out to another graph showing every ball and strike called by Diaz: 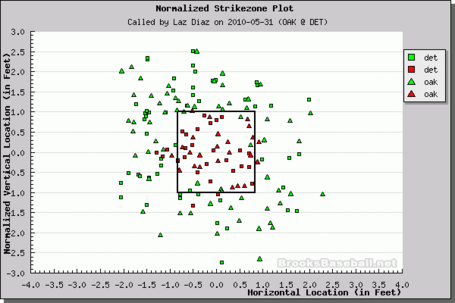 It become even more clear why Verlander thought he was owed a strike when you look at that chart. Verlander was given several pitches actually outside of that spot. 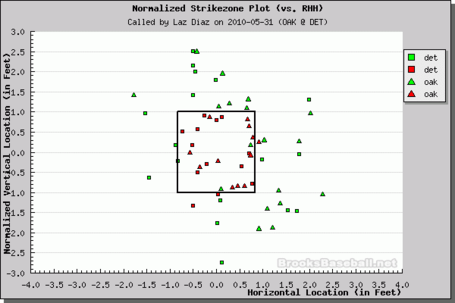 The strike zone may not have been the most consistent thing in the world -- annoying Verlander -- but don't view this as a big incident or anything to think about too much. It happens.

Ultimately, the Tigers' inability to string hits together was again the big story.

Detroit has now lost seven of its past nine games.