Share All sharing options for: Tigers struggles on the road and with umpires continue in 4-3 loss -- UPDATED

UPDATE: Interviewed after the fact, home plate umpire Gary Cederstrom all but admitted he blew the call when punching out Johnny Damon on a called strike to end the game. (Hat tip to Tigerdog1 to pointing out the story in the comments!)

Via John Lowe at the Detroit Free Press:

Sitting at his locker and clearly unhappy with himself, home-plate umpire Gary Cederstrom said that when he saw the replay of his game-ending strike-three call tonight on Johnny Damon, “It didn’t look very good.”

Cederstrom said he called the pitch too quickly and that, when an umpire makes a call too quickly, he “usually gets in trouble.”

I'm at a loss for words at this point when it comes to umpiring. Not that instant replay would have made a difference in this case, being a judgment call. Given the pitch was a good foot outside, it's safe to say it was horrible judgment.

Apology accepted...but it still sucks. The Tigers are stuck with a loss that could have been a victory. And as we found out last season, a loss in June can greatly affect a September pennant race.

What's there to say about another loss to the Braves? The Tigers lost ugly...sort of like Men's National Team in the World Cup.

Tigers couldn't hit a pitcher, Kenshin Kawakami, who was 0-9 coming into the game. The bats made Kawakami look like the next coming of -- feel free to place the name any pitcher from the Braves dominant starting rotation in the early 90's here. Yet the Tigers somehow scratched out 1-0 lead in the 6th on a Miguel Cabrera RBI ground ball.

As well as Max Scherzer had been pitching, you may have had thoughts the small lead would hold up.

But Scherzer, who had stranded a runner at 2nd in the previous 2 innings, couldn't throw a strike in the top of the 6th, walking 2 Braves. Joel Zumaya got him out the 6th, but Zoom proceeded to walk 2 batters (Deja vu!) in the 7th, both of whom scored on a Chipper Jones home run.

The Braves also tacked on an insurance run in the 8th, which ended up becoming extremely important.

Thanks to how badly most of the Tigers were swinging, managing only 2 scratch hits till Cabrera lined a no-doubt solo home run in the 9th, I was thinking Jones' shot essentially ended the game. Though the Tigers, to their credit (and even more to the Braves), did get the winning run to the plate in the 9th.

The Braves bullpen imploded after 2 were out. Carlos Guillen, Brandon Inge, and Gerald Laird all walked. Danny Worth entered as a pinch hitter, and walked on 4 pitches. Guillen strolled home, bringing the once moribund Tigers to within 1 run.

Jim Leyland then got the match up he wanted, as left hand hitting Johnny Damon came off the bench to pinch hit against righty Peter Moylan. Damon worked a full count, possibly fouling off ball 4 for strike 2...then home plate ump Gary Cederstrom made this call (screencap by yours truly): 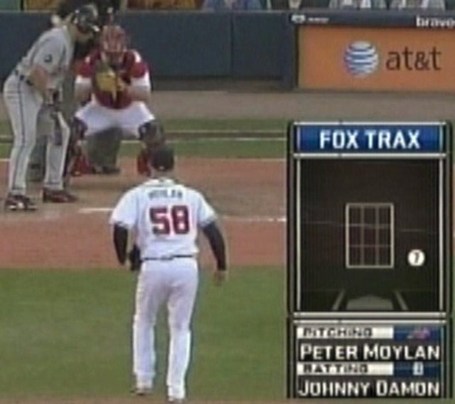 Thanks to getting screwed by an umpire's call AGAIN, the Tigers are 1-4 on the current road trip.

Honestly, I can't let the Tigers off the hook over a bad call. They did absolutely nothing offensively until there was 1 out in the 9th inning. Even then, it became a game thanks to the Braves' inability to find the plate, instead of anything the the Tigers did.

Even worse than Cederstrom's call are the Tigers squandering chances to take over the Central division lead. It's not as if the Twins have been doing much of anything till this afternoon, beating the Mets. (who were having a grand old time playing AL Central "contenders.") Really, rhe only Central team currently playing like a playoff contender is the White Sox.

I wasn't expecting a winning road trip, considering the competition, but I was expecting better than what I've seen. With a 3 game series with the Twins looming on Monday, the Tigers need Justin Verlander to step up big time tomorrow.