We all have questions about this maddening, yet quite entertaining, Tigers team. As today is the worst sports day of the year (The only event on the schedule are the lame ass ESPY's, for crissakes!), we have the time to answer a few... 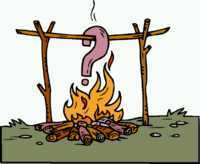 The Tigers find themselves a half game back of the 1st place White Sox at the break. Are the Tigers under-achieving, over-achieving or right where you thought they'd be?

Let me put it this way. The Tigers are right where I thought they'd be, but they over-achieved to get there.

How does that make sense? If I were asked before the season where the Tigers would be in the standings if these 10 things* happened...

1. Scott Sizemore would be overwhelmed at the plate, and sent down to Toledo to regain his stroke.
2. Carlos Guillen would miss a significant amount of time due to an injury...then replace Sizemore as the everyday 2nd baseman.
3. Rick Porcello was also sent down to Toledo due to his utter ineffectiveness.
4. The Tigers' planned setup men would have major issues; Joel Zumaya and his marvelous arm would break down...again, and Ryan Perry would struggle to get anyone out.
5. The catching combo of Gerald Laird and Alex Avila would have trouble hitting Jim Leyland's cholesterol count.
6. Adam Everett would be released for...you got it...ineffectiveness, to be replaced by a utility man platoon of Ramon Santiago and Danny Worth.
7. Brandon Inge would spend the first 2 months of the season hitting like the Inge of August/September 2009.
8. Dontrelle Willis would flame out as a starter, ultimately being traded due to...yes, ineffectiveness.
9. There would be only one starting pitcher (Justin Verlander) with a winning record at the All-Star break.
10. Jim Leyland would not be able to smoke his beloved Marlboro reds ANYWHERE in Comerica Park.

*That's not including Ryan Raburn proving his breakout 2009 season was a fluke, the Tigers regularly playing 4 rookies in their everyday lineup, Max Scherzer being sent down, then returning to Detroit become the number two starter, and Johnny Damon starting to show his age.

...I would have said I'd be spending my summer watching a team fighting with the Royals to stay out of last place, and would start blowing out veteran players at the trade deadline in preparation for a run in 2011.

Instead, I'm watching a team that should be in the playoff hunt for the entire season, and will be looking for veteran help at the trade deadline.

When you really think about it, factoring in all the injuries, roster churn and down seasons by key players, the Tigers playing well over .500 ball is simply miraculous.

Even though the Tigers took a long, winding road to get there, they are in the playoff hunt. What do they need to do at the trade deadline?

Well, last weekend Leyland announced the Tigers would be on the prowl for a veteran bullpen arm or three. So we can add that to the July shopping list. At shortstop, the Tigers are running with a pair of players they consider utility men, so we can definitely say short will be part of their window shopping.

But there is a more glaring need.

Thanks to the emergence of Brennan Boesch and Austin Jackson as offensive threats, the Tigers have a good enough offense. They could likely muddle through the season with a Santiago/Worth platoon at short, and worry about fixing the position in the off season. Thanks to Dave Dombrowski's loading up on big arms in the amateur draft, they have bullpen arms to burn in the minors. The Tigers can keep throwing relievers against the wall to see who sticks (Robbie Weinhardt, for example). But being the rotation has turned into "Verlander, Scherzer, then pray for three days of rain", the most glaring need is for a starting pitcher.

In house, it's hard to see much help in filling out the rotation. The Tigers are rolling the dice in giving Porcello a start this weekend, but aren't committing to any more...yet. As he's been inconsistent, at best, since joining the Mud Hens, Porcello has yet to prove he can regain his late 2009 form. Jeremy Bonderman has turned into a bottom of the rotation journeyman, Armando Galarraga is a bottom of the rotation journeyman, and the fifth starter spot has become an adventure in futility. The current fifth starter, Andrew Oliver, isn't the answer. Not this season, anyway.

So Dombrowski's job over the next three weeks is to solidify the rotation.

You say the Tigers NEED to pick up a starting pitcher. What will they actually GET at the non-waiver trade deadline on July 31st?

As every GM in baseball wants more pitching, and the cost in players to get even a league average starting pitcher is going to disembowel the farm system, the Tigers will fall short in their search for a number three rotation arm. They'll likely settle for a veteran bullpen arm and more importantly, an everyday shortstop. (Where's there's smoke, there's fire, and there seems to be plenty of smoke around the Diamondbacks' Stephen Drew)

The Tigers best hope in fixing a stumbling rotation is Rick Porcello pulling a Scherzer, and showing he has his act together after his minor league stint. Stranger things have happened, right?

Obviously, the story of the first half is the emergence of Brennan Boesch as one of the AL's best hitters. Will Boesch continue to hit like the next coming of Hank Greenburg, Norm Cash and Kirk Gibson combined?

No. I don't think any of us believe Boesch will continue to hit over .340.

But there's no reason to think Boesch won't continue to be the answer to a long, long, long-time Tigers need; a left handed power hitting outfielder.

Over the years, I have cried long and loud for the Tigers to pick up a corner outfielder with big time pop, preferably left-handed. In April, Boesch drops in their laps like so much manna from heaven, swinging the bat like he was born to play in the big leagues.

Even if Boesch cools off, there's no reason to believe he can't become a 25-30 home run, .280 hitting mainstay in the middle of the Tigers' lineup, a Steve Kemp for the new millennium. It's one thing to do what Boesch has done for a few weeks. Lots of young players have over the years.

It's altogether another to perform at such a high level for three months. Boesch is here to stay.

Will the Big Potato, Papa Grande himself, Jose Valverde, reach his stated goal of 74 saves?

It's not going to happen. But he will break the Tigers' one season record of 42 set by the Roller Coaster, Todd Jones, in 2000.

I have to admit I was wro...wronnnn...wrrrr...wrong about the Tigers' off season signing of Valverde. He's having a career season, and been their best pitcher in the first half.

Could the Tigers have found a closer somewhere in their system? Sure. But could they have found a lights out, no doubt about the 9th inning guy? I honestly doubt it.

Valverde has allowed us to finally put away the Pepto Bismol we needed to get through all those 9th innings when Jones was "pitching to contact." The Big Potato would rather pitch to get guys out.

Nope, but he will be the AL MVP.

We're watching a player blossom into one of the very best hitters of his era. We should consider ourselves damn lucky in being able to witness it. Even better, we'll get to see Cabrera, a player with hall of fame talent, in the prime of his career over the next few seasons.

AL pitchers have to be cowering in their spikes just thinking about it.

Any other predictions, Carnac?

Justin Verlander becomes the Tigers' first 20 game winner since Bill Gullickson in 1991. (Yes, it's been almost 20 years!)
Alex Avila plays well enough in the season half to solidify his position as the Tigers' starting catcher going into 2011.
Gerald Laird is released.
Brandon Inge plays well enough to earn a contract extension.
The Ryan Raburn era comes to an end, as he is the extra part in a trade for NL pitching.
The Detroit/Toledo shuttle runs non-stop, filled with various bullpen arms.
Don Kelly sticks around for the entire season.
Carlos Guillen goes back on the DL (That's not a prediction, it's a GIVEN!), Scott Sizemore gets a second chance to prove himself a big league player...and succeeds.
Rick Porcello pitches well enough to stick...but we continue to hold out breath in every start.

OK, smart guy, predict this! Where do the Tigers finish?

Do you actually believe it?

The Tigers shouldn't be anywhere near contention, yet they are in the thick of a three team battle for the Central. So this entire season has required me to suspend my disbelief. There's no reason to stop now...

Feel free to make your own predictions in the comments!