Ordonez, Guillen placed on DL, Larish and Rhymes get the call

Share All sharing options for: Ordonez, Guillen placed on DL, Larish and Rhymes get the call

You already know Magglio Ordonez is out of the lineup for 4-6 weeks after fracturing his ankle. His going on the DL was fait accomplil. But it turns out the Tigers have also lost Carlos Guillen for at least 15 days, as he joined Ordonez on the DL after the loss to the Blue Jays.

Via Jason Beck of MLB.com:

Late news from Detroit and Toledo is that Carlos Guillen will join Magglio Ordonez on the 15-day disabled list Sunday morning. With Guillen's right calf strain and the Tigers already short-handed, they couldn't wait it out.

With Guillen, we knew it wasn't a matter of "if" he gets hurt, but "when" he gets hurt. Well, "when" was Saturday night. The timing could not be worse, as the Tigers are already short-handed and have to play a twin bill with the Jays later today.

With that in mind, the Tigers made a pair of call ups from the Mud Hens. One player you're going to be familiar with, the other is making his first appearance in Detroit.

According to the Toledo Blade, the Tigers will purchase the contracts of slugging corner infielder Jeff Larish and second baseman Will Rhymes from the Mud Hens on Sunday. Both were supposedly informed of the moves after the game. Neither is on the 40-man roster, so the Tigers will have to make some moves.

No word as to who will be involved with the roster shuffle (It's Casey Fien and Billy Buckner). 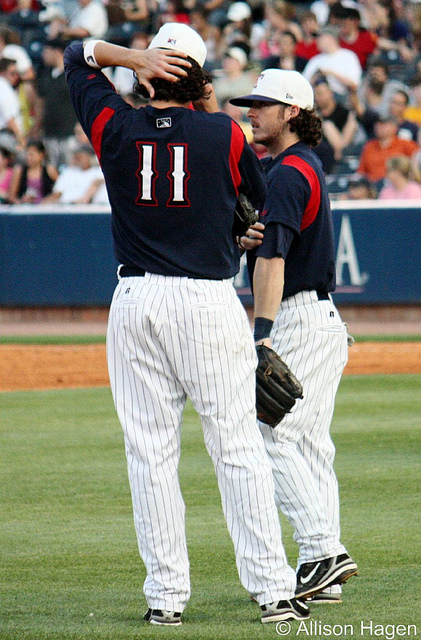 Larish and Rhymes together in Toledo, bound for Detroit.

Our own Alli has the scoop on Larish and Rhymes.

Our old friend Jeff Larish has been playing mostly at third base for the Mud Hens, has been especially hot in June and July. He's hitting .270 for the season with 15 home runs.

Will Rhymes, the lil' infielder that could, is getting his first shot at the big leagues. He is the same age as Larish (27) and is one of the International League's best hitters, with a .305 average. He's fast, too, with 20 stolen bases. He's been at second base for most of the year.

This is likely the last chance for Larish with the Tigers. His status had dropped to the point where the Tigers removed him from the 40 man roster this spring. But he's a left handed bat with some power, who can play 1st, 3rd and the corner outfield spots, so there is a chance he can contribute.

As for Will "Don't call me Busta" Rhymes, he also has versatility going for him. Along with playing 2nd base, he's spent time at short, 3rd, center and right. Rhymes has a hot bat, and can play the infield, thus he gets the call. But he's long passed the point of being a prospect.

That's where we stand as of Sunday morning. In the middle of a pennant race, the Tigers have to replace a couple of All-Star caliber players with a pair of 27 year old never-gonna-bes.

If Larish and Rhymes are best the Tigers can do...this is not going to end well.