Where's the life preservers? Tigers continue to sink in 7-4 loss

Share All sharing options for: Where's the life preservers? Tigers continue to sink in 7-4 loss

After the Tigers lost again to the Devil Rays, 7-4, I wondered how can I best describe the Tigers since the All-Star break. 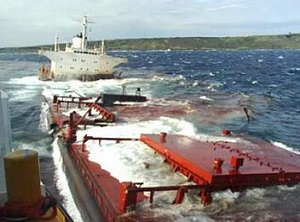 The Tigers' seas are rough, they are taking on water fast, the bilge pumps have stopped working, and they are on the verge of sinking out of the AL Central race.

The Twins won again, sweeping the Royals. The White Sox are currently playing one of the worst teams in baseball, the Mariners, having already taken the first two games of that series. The struggling to stay afloat Tigers may be five games out at the end of the night. (It's official, the Sox won, the Tigers are five games out of first)

Even worse, they are on the verge of being swept in a four game series for second time..since the All-Star break.

Despite the sinking ship, the captain of a team currently filled with Triple A players not ready for the big time, Dave Dombrowski is still bailing frantically. Here's what the Tigers' GM had to say about the team in light of the Peralta trade.

Via Jason Beck of MLB.com:

"We're trying to do something to help our ballclub, give us a shot," Dombrowski said. "We're trying to do what we can to stay in there, so we think this helps our club. He's a solid big league player, and of course we've got a lot of young players. It won't be long until Carlos and Brandon come back, but it's a situation we're trying to keep afloat."

Trying to keep afloat? I've tried to be an optimist, but I'm about ready to call for the life rafts.

After a torrid .342 first half of the season, how badly is the second half going for Brennan Boesch?

Going into tonight's game, Boesch was hitting .095 after the break...and it's going to drop after another 0-4 night. If Boesch can't get going again...well, so much for Cabrera getting another decent pitch to hit this season.

At this point, with a shorthanded roster full of should-be Mud Hens, backups and struggling rookies, Jim Leyland's lineup shuffling is the equivalent of rearranging the deck chairs on the Titanic.

The Tigers can shuffle players and lineups all they want. But without the missing pieces of Magglio Ordonez, Carlos Guillen and yes, even Brandon Inge, or finding players capable of treading water in their place, it won't mean a thing.