Share All sharing options for: When is a strike not a strike ... Mariners 8, Tigers 1

Let's get two things straight up front: Umpiring isn't as easy as it looks when you're sitting in a media booth or watching a game back home. Everyone thinks they can be an umpire at the highest level but the proficiency these major league umpires have is so much better than anyone could dream.

And let's admit CB Bucknor's strike zone didn't result in the Tigers losing on Sunday. Jeremy Bonderman, Gerald Laird and Jim Leyland know what. I'm sure we all do too.

But seriously, CB . Where exactly was Bonderman supposed to put these pitches to get them called strikes? 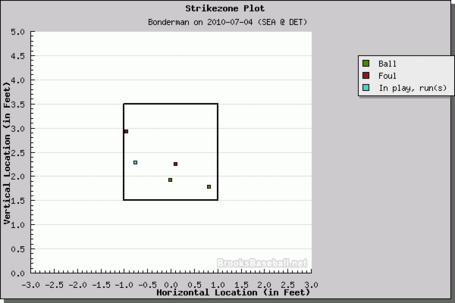 This might not be such a big deal, if not for the fact that green pitches in the middle of the strike zone were called balls when they should have been strikes with the Tigers getting out of the inning still down just 3-1. With no where to put the ball to get an actual strike, Bonderman found himself in a difficult position. A few pitches later Franklin Gutierrez made the best of his second life and singled in a run. Two pitches after that, Casey Kotchman hit a 3-run home run. 7-1, Mariners.

At that point, it was most definitely over.

Bonderman and his catcher, Gerald Laird were so disgusted by the entire matter they got themselves tossed from the game as soon as the inning ended. Manager Jim Leyland tried to add his name to last list but failed and had to watch the rest of the game.

I've always said I hate seeing people blame the officials too much for holding their teams back. Execute, execute, execute, and don't leave it up to chance. This game belongs under that banner, especially with Cliff Lee on the mound for the Mariners.

Beating Lee is tough enough to do though, he doesn't need help. I'm seriously wondering if every single call has to go against the Tigers. I thought that meme ended when the calendar turned from an incredibly annoyingly officiated June to a just July.

So much for that.