Has the time come for the Tigers to wave the white flag on 2010?

Share All sharing options for: Has the time come for the Tigers to wave the white flag on 2010?

I'm a bonehead. I admit it. At the All-Star break, I said the Tigers would win the Central division. Then the last three weeks happened.

Post All-Star break, watching the Tigers has been comparable to being slapped the face with a cold, dead fish...every day.

After splitting a twin bill yesterday, the Tigers are five seven games back of the Central division leading White Sox. They remain nominally in the division race.

But does anyone still think this flawed team, ravaged by injuries, can realistically contend? I was one who did...the operative word being "was".

Anyone else still believe? Anyone?

OK, there's a few of you left...but there are less and less of you each day. I don't even think Dave Dombrowski believes his team is a contender, going if you go by his only trade deadline pickup, Jhonny Peralta. Peralta is a player the Indians were thrilled to trade away, even for only pennies on the dollar in return. But Peralta is better than the Tigers' current alternatives...which is faint praise. Very faint.

I've tried and tried and tried to be optimistic about this team over the past three weeks, but the outright bad baseball the Tigers have been playing (especially on the road) have me believing the Tigers' chances of making the playoffs are smaller than the chances of Miguel Cabrera winning the Triple Crown. With teams pitching around Cabrera pretty much at will, as he's been the only offensive threat in the everyday lineup since Black Saturday, his Triple Crown chances are jack and squat...and jack left town.

I'd be more confident the Tigers could stay in the divisional race if it were only two teams vying for the lead. But it's (again, nominally) a three team race, as the Twins are only a game and a half back of the White Sox. And that's what will make it much harder for the Tigers to gain ground. The slowly sinking Tigers have to leapfrog a pair of teams they historically struggle against mightily, year in, year out,.

Remember, it's not only the Twins and Sox who give the Tigers' fits. They have been known to play below the level of the other two teams in the Central, the Indians and Royals. The Tigers are five games under .500 within the division..barely above the team with the worst intra-division record, the Royals, at six games under.

Out of the many reasons the Tigers' season is all but over, their divisional play may be the biggest. They play like utter crap within the Central...and did so even with a healthy roster.

And the Tigers have to jump over two teams?

Not going to happen. Not with the roster in total disarray.

According to Cot's Baseball Contracts, the Tigers' payroll for 2010 stands at $133,995,400. Yet the Tigers, despite their bloated payroll, have absolutely no depth whatsoever. Sure, injuries are partially to blame for the lack of depth, but much of it is due to Dave Dombrowski's roster mismanagement. Jim Leyland is being asked to play career minor leaguers in the middle of what we're supposed to believe is a pennant race.

Dombrowski needs to be asked this question every day by Mike Ilitch.

"How does a team with a payroll well north of $130M have no depth on the bench, and worse, even less in the minor league system, and over $23M in dead money?"

I'm not even sure Dombrowski himself can come up with a decent answer. At best, all he can say, "Them's the breaks, boss." 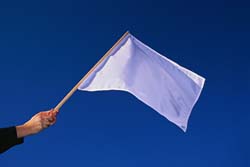 I hate to say it, but the white flag needs to be waved...vigorously.

I'm not a huge fan of selling off veteran ball players for prospects, as prospects rarely pan out. But it's worthwhile to make it known you are willing to talk.

A team desperate to get over the hump might make a tempting offer for Johnny Damon or Jeremy Bonderman, to name the Tigers' most attractive trade chips.

If I'm Dombrowski, I'm listening. You just might luck your way into filling one of several roster holes for 2011.