Share All sharing options for: Breaking down Brennan Boesch's Breakdown

Editor's note: The previous post just completely disappeared, I have no idea why.

Statistically speaking, Brennan Boesch's season peaked around June 27, though you can quibble a bit with the exacts. That day, he went 2-for-5 with a home run, raising his on-base percentage of .389 and his slugging average to .621. It wasn't highest OBP of the season. That came a couple of weeks later, helped by a sudden proclivity to take a free base when the pitchers tried to get him to fish. It wasn't his highest slugging average; that came a few weeks earlier before a mini slump knocked it down a bit.

But that was the last time Boesch hit a long ball, and the last time he drove in runs at more than a trickle's pace. He had 45 that day, about two months into his major league career. He has 53 now.

What happened exactly, and when, we can't say for sure. But we know the result: In July, he got on base just 31 percent of the time, and his slugging average fell to a paltry .253. So far in August, you can cut both of those numbers in half. Boesch transitioned from being Alex Avila, to Scott Sizemore, to Don Kelly. Now he's Adam Everett in the five-hole. That's how bad it has gotten.

Possible symptoms of the slump

I decided I'd check out Fangraphs.com and TexasLeaguers.com to get a better feel.

A few things stood out at Fangraphs. You could view them as symptoms of what's wrong. with Boesch, rather than the underlying cause. His BABIP went from being unsustainably high to being quite below average. The graph below demonstrates that. 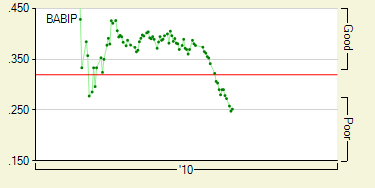 His strikeout rate remained about the same as it had been, though it's seen an uptick in the past two weeks or so. 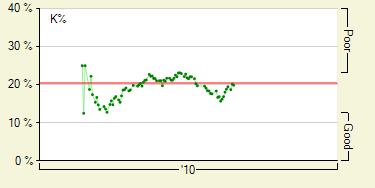 And his ground ball rate increased at the expense of his fly ball rate, while his line drive rate decreased slightly. 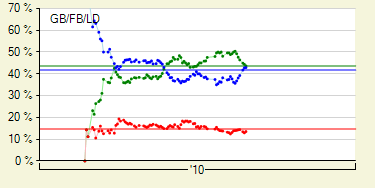 On Fox Sports Detroit Thursday, the theory on Boesch went like this: He had been a pull hitter for his first couple of months. In recent weeks, he was attempting to use too much of the field.

Here's a spray chart from before and another from after the All-Star Break. Both courtesy of Texas Leaguers' Pitch F/X tool. (The links will take you right to the originals).

Boesch before the break

Boesch after the break

We're not comparing equal sample sizes, so it's not as easy to eye it up. But Boesch seems to be going to left field for a higher percentage of his balls in play. It's even more true for the past 10 days. He's barely even hit the ball to center field, and has just one flyout to right.

What's also interesting to me is that he seems to be pounding the ball all over the infield at a high rate and has little to show for it.

My theory is that the cause of these ills is in a large part the way Boesch is being pitched.

Since the All-Star Break, he's swinging and missing at the four-seam fastball 13.3 percent of the time, or about twice as often as he did before the break. He sprayed it all over the field for hits before, but now it's mostly going to the opposite field.

The reason I zeroed in on these to stats is simple: He's been seeing more of them in the second half than the first. The number of pitches recorded as four seamers went from 37 percent to 42 percent of total pitches. Changeups went from 14 percent to 18 percent. Cut fastballs were up from 5.5 percent to 7.9, but Boesch hasn't really struggled. Sliders, curveballs and two seamers all saw drops.

I am not able to find the data myself, but I suspect you'll find pitchers are getting Boesch to chase pitches all over the place. Pitchers are probably excited to face him, no longer fearing how far from home plate he'll deposit their pitches. He's playing into their hands.

Like analysts always say, players are constantly changing and adapting to each other. After Boesch found some success, it looked like there was no way to get him out. I remember an ESPN.com report saying that all of the hitting zones were covered by Boesch's bat. That no longer appears to be true. Pitchers figured him out. He has yet to adapt.

Is this Jim Leyland's fault? We constantly read how Leyland does not want Boesch to study the videos or change anything about the way he does things. Fortunately we've learned work is being done behind the scenes.

Tuesday, Leyland had this to say to the Freep:

"That's a conversation I really don't want to get into right now because we're trying to figure out some thing. It's a little bit of a catch-22 for us right now. We're having discussions that are not for the public. He's going to be a good major league player."

Johnny Damon weighed in (in the same article):

"(Hitting coach Lloyd McClendon)and I were watching video of him when he was hitting line drives and hitting the ball well as opposed to how he's swinging now, and there seems to be a longer swing. There's a little hitch through the hitting zone. I think Mac is onto something that will help. I knew he wasn't going to hit .350. I think he'll be the type of hitter who will average between .280 and .310, and he will hit with power."


Boesch is broken. Can he be fixed? Certainly. Will he be? That remains to be seen.
In the meantime, the Tigers have to be careful about his position in the lineup. After just a day batting sixth, he was moved back to the No. 5 spot. Protecting Miguel Cabrera's attempt at a Triple Crown is far too important to be left to a struggling rookie trying to figure things out.
Fortunately today's lineup has Boesch down in the No. 2 spot, which means a bit less pressure to perform.
It will be interesting to see if Boesch is able to recover from these past few weeks, or if he's doomed to be a footnote in Tigers history.