With help from the umpires, Rangers blow out Tigers, 11-4

Share All sharing options for: With help from the umpires, Rangers blow out Tigers, 11-4

The recap in a nutshell: The Tigers took a quick 4-1 lead, watched it gradually disappear as Jeremy Bonderman gave all four runs back, the bullpen only added fuel to the fire, as the game snowballed into a blowout in the late innings of 11-4 loss to the 1st place Rangers. There's one caveat to the loss, as the Rangers comeback was greatly helped by more bizarrely bad umpiring.

Bonderman's night wasn't at all helped by ANOTHER awful call going against a Detroit team. In the 4th inning, the Rangers' David Murphy hit a long, high fly which hugged the right field line, and looked to have been just to right of the foul pole. Regardless, the umpires called it a home run, which was quickly contested by Bonderman and Jim Leyland.

Off to video review we went, and the Fox Sports Detroit replays showed what seemed to be conclusive evidence. The ball was clearly foul. Not foul by much, but foul all the same. 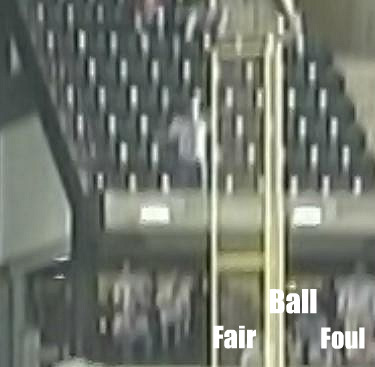 Screencap via yours truly

After a very lengthy delay, the home run somehow stood. Not surprisingly, after a long wait for the wrong decision to be made, Bonderman struggled. He hit the next batter, Vlad Guerrero, and ultimately allowed two more runs in the inning to tie the game 4-4.

But the umpiring silliness didn't end with one bad call.

In the 6th, the Tigers were shafted again, as Robbie Weinhardt struck out Ian Kinsler...until he didn't. 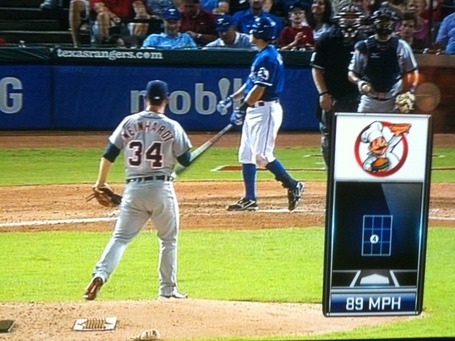 Screencap via my friends at Detroit4Lyfe

As you can see in the above sceencap, Kinsler was actually walking away from the plate, as he thought he was caught looking, ending the inning. Home plate umpire Brian Runge was watching...something other than the game in front of him, as he didn't make the strike three call. With renewed life, Kinsler singled home the 3rd run of the inning.

The obviously bad calls didn't cost the Tigers the game. A shaky bullpen, questionable defense (Errors by Will Rhymes and Brandon Inge accounted for three unearned runs) and no offense after the 4th inning had more to do with the loss.

But it's impossible to win games when you're not only playing against a very good Rangers team, but also an umpiring crew who are in dire need of a visit to an optometrist...or a new career.

Offensively, it was a very odd game for the Tigers.

The Tigers had only seven hits, six of them singles. All six came off the bats of two rookies, the once missing in action Scott Sizemore (2 hits, 1 RBI), who got a rare start, and Casper "The friendly outfielder" Wells (career high 4 hits, 1 RBI), who continued to impress since being called up in late August. The other RBI were off the bats of Ramon Santiago and Jhonny Peralta, both with sac flies.

The only other Tiger to chip in with a hit was Johnny Damon with a 9th inning triple...who was still standing on 3rd as the game ended.

No matter how good or bad your pitching, you still need to score runs to win. Neither of which the Tigers have been doing with much regularity as of late.

But about the umpiring...

After the Armando Galarraga perfect game fiasco, the Damon game tying walk that wasn't against the Braves, the beyond bad calls tonight, and let us not forget the Calvin Johnson game winning touchdown that wasn't this past weekend in Chicago, I've had my fill of God awful officiating...which reminds me of a joke.

One day the Devil challenged the Lord to a baseball game.

Smiling, the Lord proclaimed, "You don't have a chance, I have Babe Ruth, Mickey Mantle, and all the greatest players up here".

"Yes", snickered the devil, "but I have all the umpires."