There was a major league baseball game in Cleveland today...but apparently no one knew about it. 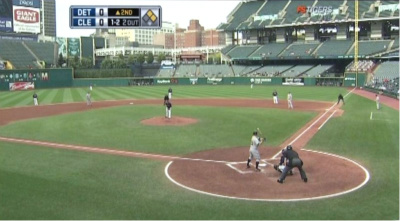 I have more people in my living room than there are in the stands at Progessive Field today.

Even though fans have better things to do in Cleveland than watch the Tribe, Justin Verlander will take the mound in the nightcap of today's doubleheader looking for his 19th win of the season.

The question his start raises is this; if Veralnder nails down win number 19, would the Tigers allow their ace to pitch on short rest Sunday in order to give him a shot at reaching the 20 victory milestone?

ESPN's Buster Olney, via Twitter, says it's not going to happen:

Justin Verlander goes for win No. 19 today; the Tigers have no plans to pitch him on 3 days rest to go for No. 20 on Sunday.

Over at the Freep, Jamie Samuelson thinks the Tigers should allow it:

So if Verlander wants to go for 20, he should go for 20. It’s totally up to him. He’s not some fragile, young pitcher that needs to be protected like Stephen Strasburg.

You know what this means? A poll!

Would you allow Justin Verlander to pitch on short rest in order to reach the rarefied air of 20 wins?

This poll is closed