The fine people at Fangraphs.com continue to adds tools that make their site one of the most fun in baseball. The most recent is a WAR Grid, developed by Joshua Maciel, that helps you compare the career wins above replacement for players in whatever way you want. OK, that's not entirely true. Right now they only have it for position players. But that's fine.

But before I did that, I wanted to show an overview of the top 25 Tigers position players by WAR. 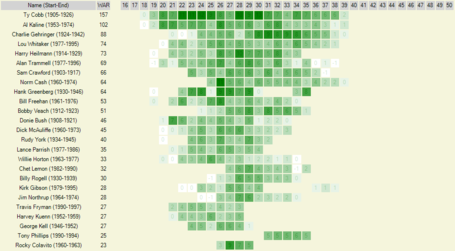 You'll probably want to click the image to enlarge it.

Just to explain what you're looking at, each box indicates how high the WAR was for the player at a certain age. The greener the box, the higher the WAR. Even if you don't understand all the exacts of what makes up WAR, you can use this graph as a nice shorthand to see how good players were compared to others just by looking for a line of dark green.

Right off the bat, what jumps out to me is how great Lou Whitaker really was. Another thing that jumped out to me is that there's a few Tigers on there I don't know a lot about. I just learned about Rudy York during these past few months. So that was pretty neat. But I don't know much about Bobby Veach for example. Look how long Ty Cobb played at a very high level. Look at just how great Rocky Colovito was at age 27.

Over the next weeks, I'll try to take a look at some of the top players by decade. if you play around with it -- here's the link again -- share your cool findings with us in the comments too.