You might remember a few days ago I took a look at some of the top Tigers' position players of all time using the WAR Grids tool available at Fangraphs.com. Since I did mine, Lee Panas jumped on board at Tiger Tales, showing how Alan Trammell and Lou Whitaker compared to other shortstops and second basemen, respectively. So you'll want to go check those out if you haven't.

Just for a reminder, WAR means Wins Above Replacement. It takes into consideration both offensive and defensive contributions, as well as the position and number of games played. It's a quick down-and-dirty stat for comparing players.

I thought I'd take a look at the Tigers by decade, starting with the most recent 10 years and working my way backwards. Don't expect this series to be daily, but I'm sure it will be wrapped up before pitchers and catchers report. (Which is less than a month away!) 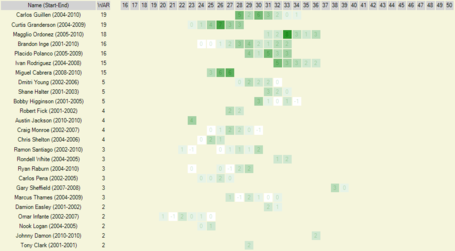 (Click it to enlarge the graphic and walk through the history books...)

You might notice Miguel Cabrera had the sixth-highest WAR for the Tigers. Some could be surprised by that -- until they realize he did so playing just three seasons in Detroit, while everyone above him on the list played at least five seasons. That speaks to the quality of Cabrera's play.

But as good as 2010 was for Cabrera, Magglio Ordonez's batting-titlel-winning 2007 season was actually the highlight of the decade for Detroit. Even more amazing is that the Tigers' second best individual season also came in 2007, when Curtis Granderson became a powerful base-running machine by having 20 doubles, triples, home runs and steals. He did pretty good in the field that year, too. The third and fourth best individual seasons are both held by Cabrera, but Carlos Guillen sneaks into a tie with him for that.

Guillen, by the way, was the leader of the decade despite the fact he's missed large chunks of the past two or three seasons due to injuries. Playing shortstop during his peak years probably helped.

I also noticed the top seven players on the list came from the glory half of the decade: Guillen, Granderson, Ordonez, Inge, Polanco, Pudge Rodriguez and Cabrera.

After a pretty sizeable dropoff, the rest of the top 10 played primarily during the part of the decade we'd probably all prefer to forget: Dmitri Young, Shane Halter and Bobby Higginson. (In one season alone, Austin Jackson nearly matched what it took each of these guys at least three seasons to do.)

I feel like this chart really serves to show you just how thin the organization has been the past 10 years. It also shows the low number of position players developed by the Tigers in the past that actually turned out well: Only two of the top six players were drafted by the team, and only three of the top ten. So that's why most of the top players on the list were performing at a high level after age 28.

I really wish we could add pitchers to this, because I feel like we'd see a lot more green on the chart thanks to some pretty wonderful performances the past few years.

What jumps out to you?