These are the Tigers I grew up with. Sure the first game I attended in the 80s, but the 90s are the decade I was old enough in my childhood to really know what was going on and zealously follow it. So for me, this is probably the most fun of the graphs.

Remember, you can play around with making your own graphs if you want at Fangraphs.com, and click this graphic to enlarge it. 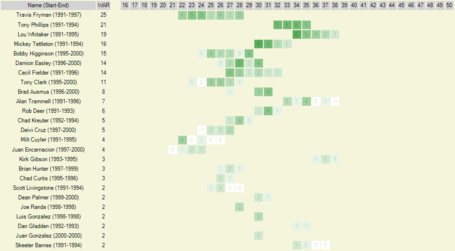 So who's up top? None other than my favorite Tiger of the 90s, Travis Fryman.

Lou Whitaker and Alan Trammell were obviously still around at the start of the 90s, but for whatever reason I was a big Fryman fan and hated to see him eventually end up playing in Cleveland.

Tony Phillips and Lou Whitaker round out the top three. Personally, I was a bit surprised to find Mickey Tettleton so high up the rankings at fourth. I remember him for being a slugging catcher, at one time a member of a fearsome home run trio that included Cecil Fielder and Rob Deer. But third? Wow. With a WAR of about 6, he also had one of the best individual seasons by a Tiger in the 90s.

Speaking of Fielder and Deer, they can be found a bit lower in the rankings. Part of that is the arbitrariness of looking at decades as things that have 1's and 0's in them. Fielder's 50 home run season came in 1990, so that extra 7 WAR misses us by a season. But I guess we can save that for next time!

So what names spark some memories in you?