My Experience at TigerFest, with Pictures

Share All sharing options for: My Experience at TigerFest, with Pictures

I went to the TigerFest for the third straight year yesterday and by this point, have it down to a science. The first year, I went with a friend and wasn't all that sure what we were going to do. I didn't have much interest in dropping a couple hundred bucks on Tiger gear or memorabilia. As for autographs, the only signatures I care about are those on my paycheck every couple weeks.

Once we got there, though, we heard the panel discussions through the PA system and went to find them. We ended up sitting down and listening to the various panels for the entirety of the event. The next year, we realized if you are just going to listen to the panelists, there's no point in getting there early and freezing your tuckus off waiting to get in. Not only that, the panel discussions are inside so the tuckus stays nice and warm once you get in as well.

This year, I was able to talk my wife into coming by ensuring her that all we'd have to do is walk in and listen to players and coaches goof around all day. But once again, we arrived, walked around for a few minutes - long enough for my friend and my wife to each buy winter Tiger hats - and hurried upstairs to the panel discussions and heated indoor space.

We arrived a little late, but still were there long enough to hear a question about possible sixth and seventh starters for the Tigers. I was still looking for a seat at the time, but I believe it was Dombrowski who mentioned Andy Oliver, Charlie Furbush and Jacob Turner as possible answers should such a need arise. As he mentioned the talents of each, he said Oliver and Furbush were expected to be in Toledo while Turner would probably be in Erie. He, of course, didn't say whether Turner would start the season in Erie, just that he would probably be there this year. 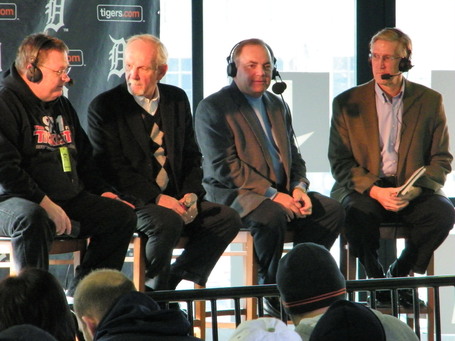 The first couple panels were mostly Dombrowski and Leyland talking about what their expectations about the team and explaining why they did some of the things they did during the offseason. Once they're finished, it's mostly the players' show, and that's clearly the highlight and purpose of the event. 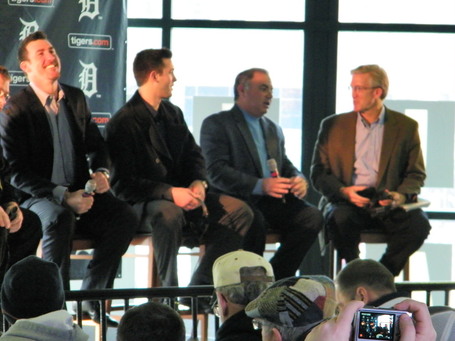 The players who join the panels show a pretty broad range of personalities. Some seem to have agreed to participate because they were asked. Some seem to truly enjoy getting up there and hamming it up. Justin Verlander, who was with Rick Porcello as the first players to join the discussions, is certain one of the latter. He jokes with the fans and moderators when they ask less than flattering questions, and seems to genuinely have a good time.

I wasn't taking notes or anything, but there were a few comments and observations about the players that stand out as I think back to the event and in the interest of time, I'll just lay them out in bullet points. 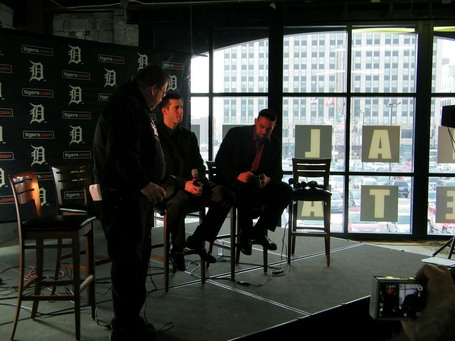 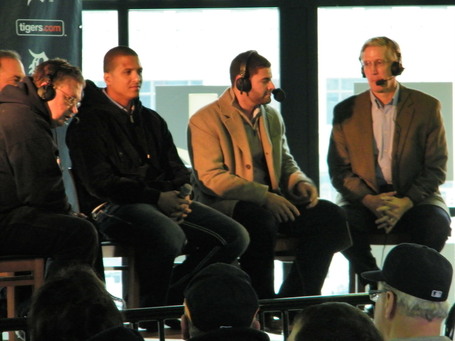 I don't recall anything particularly notable about Martinez's comments. It's cold. It was warmer in Venezuela. It's impressive to see all the fans turn out. He has no problem catching less on a team that's winning more. 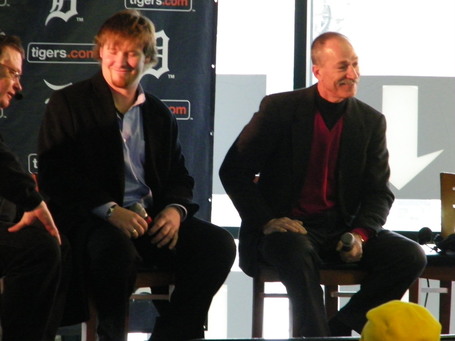 Phil Coke was perhaps the star of the day. He did almost nothing but crack jokes, making fun of the Yankees, and polling the fans to see who they hated most among the White Sox, Twins, and Yanks. He was surprised to hear the loudest reaction to the Yankees, and opined that while the Yankees are a pain, the Sox and Twins suck.

Coke also told a funny story about how during the 2009 World Series, he was told that he would be a Yankee for a long time. Then on December 5th, he was traded to the Tigers and had expected a long time to be more than a month-and-a-half. More big laughs came when he lamented not having a jersey in the pro shop.

On a (slightly) more serious note, Coke said he couldn't wait to get into the starting rotation and welcomed people's skepticism as to whether he could handle the role. 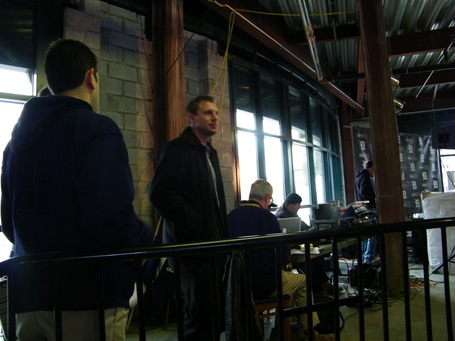 Scherzer is another one who seems to enjoy being on the panel and was incredulous when Boesch said he didn't have a TV for the first half of the season last year. 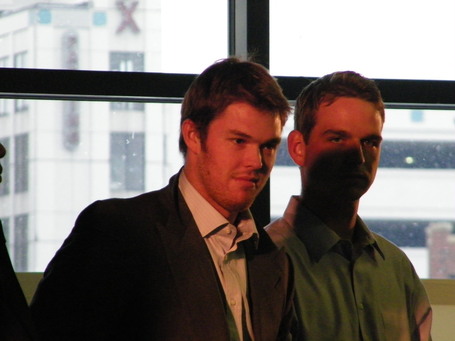 Speaking of Boesch, "he's got jokes" to quote Scherzer, and the fact that he's had a Ford Bronco since he was 16 and loves the truck, went over big with the Detroit audience. He also pushed back a bit against the common wisdom that his struggles were due to pitchers figuring him out. He said when the team started struggling in the second half, he put too much pressure on himself to help pull them out of the slump. 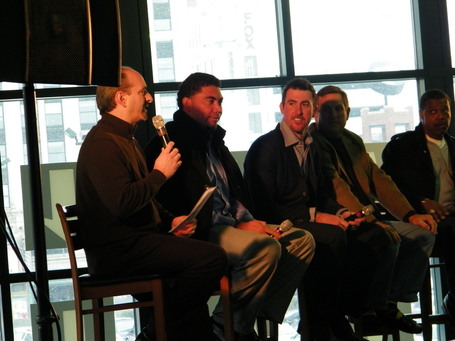 Joaquin Benoit answered some of the same "new player" questions you'd expect. You know, the Detroit weather and these crazy fans who come out in January. He also said that when he was a free agent, Jose Valverde told him if he went somewhere else, the two of them would have problems. As Mario Impemba said, Benoit seems to be another character and another contributor to what looks to be a fun season. 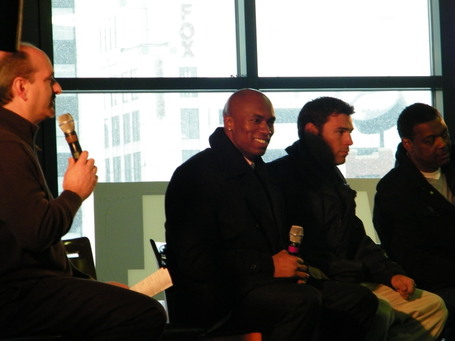 Austin Jackson was all smiles, joking more and looking more comfortable than last year. That probably has a lot to do with who he was replacing and the fact that he has now shown he's a worthy Detroit center fielder. He talked a lot about the catch in the Galarraga game, saying that off the bat, he thought the perfect game was over. It was funny hearing him describe how he and Don Kelly had to suppress their emotions because you don't want to show too much while you're still on the field. When asked if that was his best play, Sizemore made reference to a catch in Texas that I couldn't place at the time. 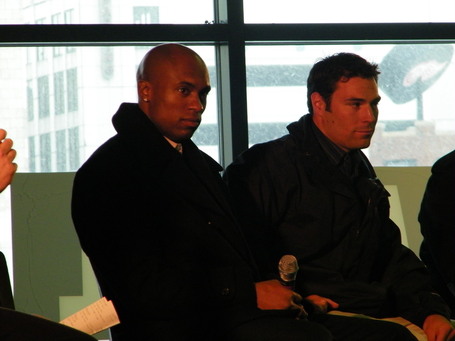 Sizemore is one of the quieter players to do these panels, but when asked about his ankle injury, he said his performance last year improved as he got more comfortable with the idea of it being healed. 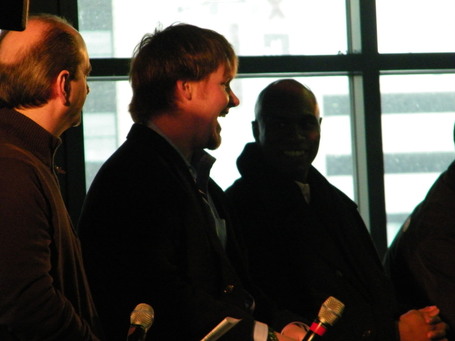 Coke came back for a second time (late) to join Jackson and Sizemore. This was actually when he was talking about the pro shop, and said he was late because he was asking why his jersey wasn't for sale. "They've got Sizemore's jersey in there." When those three - Coke, Jackson, and Sizemore - were up there, that was probably the most entertaining session of the day. 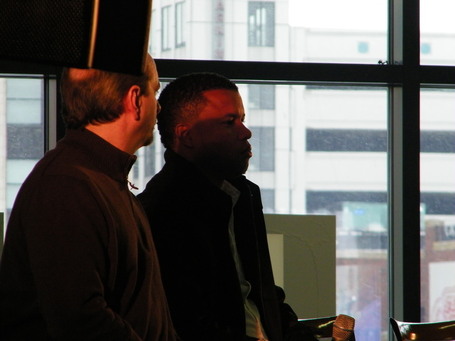 Santiago was asked to show his teammates how to bunt more. 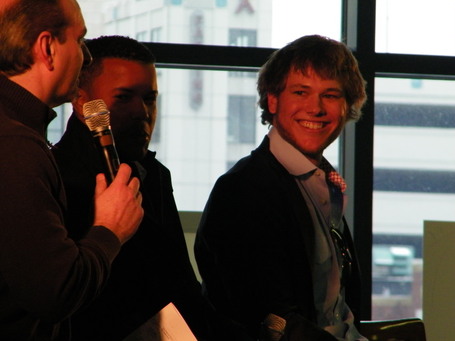 Perry took some ribbing for his hair, especially when he explained that he had just had it cut four days ago. 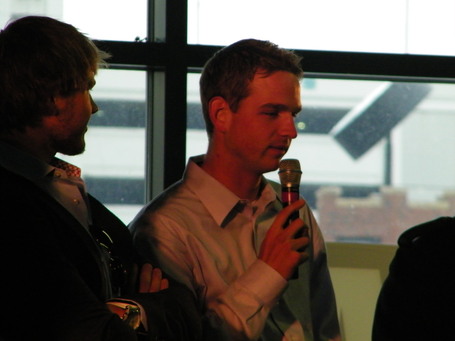 Turner handled his introduction to Tiger fans well. Questions geared toward top prospects are very predictable, just like those of new players. 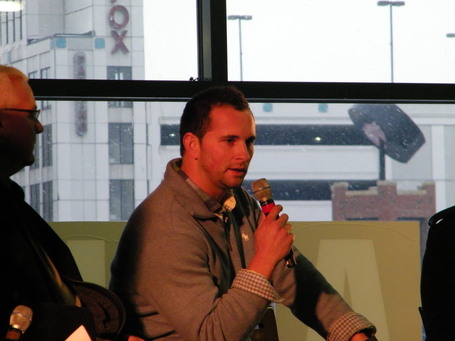 As is the case with Coke, I'm sure Casper Wells comes away from these events as a favorite of a few more fans. He seems very comfortable up on the stage, as was evidenced by him openly discussing his Bieber Fever. He also displayed his affliction by accepting a packet of Justin Bieber stickers from a fan and sticking one to his shirt. 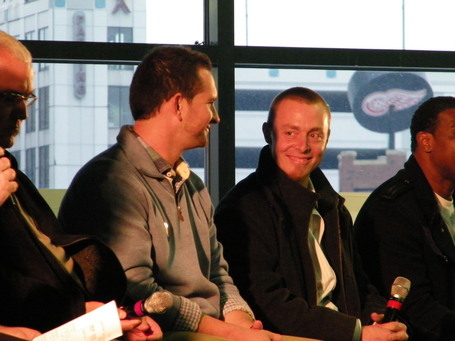 I said Coke was perhaps the star of the day, because in reality, Brandon Inge is the most popular player every year. There wasn't a seat to be found when he joined the panel and I'd guess little kids asked more questions of Inge than all the other players combined.

Among the questions he fielded were one about his high socks and whether he could get other players to join him in this uniform choice. When he explained he does it as a nod to former ballplayers, it was well received. I wonder if these same fans would be receptive to going to the game in three piece suits and fedoras or summer dresses.

I didn't see it, but my wife said Brandon said "Oh my God" when a fan asked how he felt about having to take a pay cut so the Tigers could sign Jhonny Peralta. His dodge of what was, frankly, a question in poor taste, was further evidence of why he's so popular.

Overall, this event is a lot of fun. I tend to think of Tiger players in terms of how they're going to help the team, so it's good to see them in this light. It tends to pull me back toward being a fan of the players as people rather than just what they can do for the team. Another nice thing about the event is it is very effective in getting me pumped up about the upcoming season. Admittedly, that's not hard to do but hearing the players excitement for the season to start and sharing the hope for what it might bring is invigorating.

Speaking of which, there seemed to be a lot more confidence this season about what this team can accomplish. Rick Knapp said if Brad Penny and Phil Coke get 28-32 starts, he thinks the Tigers will make the World Series. There were a lot of references to playing in October. When Austin Jackson said they would hopefully bring another World Series to Detroit, Coke chided him, "Hopefully?" Jackson started to explain that you have to be a little cautious before changing hopefully to "will".

It's nice to see them thinking in these terms, but then again, spirits were pretty high at the 2008 TigerFest as well. I don't want to close on a down note, though. I think the Tigers will put a good fight to take the Central this year, and going to TigerFest is usually good for pumping up my prediction for the upcoming season by a couple of wins. I'd certainly recommend it to anybody who asked me if they would enjoy it.