Share All sharing options for: Ryan Raburn remarkably consistent (in his inconsistency)

It's becoming a trend. You just expect Ryan Raburn to perform poorly in the first half. It feels like something that has gone on forever. Yet, if you look at the splits from just two seasons ago, he actually did well on both sides of the All-Star Break. Go back to 2008 and you'll find the trend reversed, with a horrible dropoff in the second half.

But what hasn't changed is Raburn playing frightening defense no matter the position.

I guess you could look at his season numbers, and we probably should. But here are the splits.

Looking at March/April, it's amazing to see such a bad average and OBP with an above-average BABIP ... until you notice the strikeout figures. Wow. And of course, you notice he had so many hits in September because half the time when the ball was in play he got a hit. Also amazing.

A close inspection of the numbers might lead you to notice Raburn walks little and strikes out a lot. In fact, looking at his season totals his 2011 BB% was a career low 5%, while his strikeout rate was a career high 27.3%.His isolated power was as low as it has been since 2008, too.*

So I mean, even by Ryan Raburn standards, this was not a good year.

He did put some pieces together in the postseason anyway. He struck out in just 25% of his at bats. He had two home runs and a .911 OPS. So there's that, anyway.

Raburn was again rated as above average in left field by UZR, which we always must note suffers from sample size problems, especially with players who move around the field as much as Raburn does. He has a +6 defensive runs saved at left field and +4 overall. 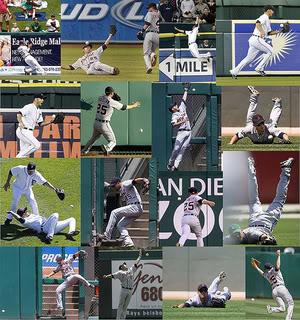 You get the point.

At the Fan Scouting Report, he was given an average grade of 38, and his arm was rated above average. But his hands? 12 out of 100. That has to be a record, right? Even Delmon Young got 14 ... from Twins fans!

He always has potential to put it all together and be useful, but I wouldn't feel comfortable putting strong odds on it.

I think Raburn's future is showing serious signs of decline right. At least, his future in Detroit. He has some utility and he's not always awful. But would you want to rely on him early in the season? And in the outfield, the top 4 spots plus Don Kelly appear to be set. And Raburn just shouldn't play at second. If the Tigers can get the moves done, he won't play at second, either.